There are three real hunts, and you can earn a Demo Player Bonus item pack in the full game

Capcom released the Monster Hunter Rise PC demo on Steam today, and I’m glad it exists. As much as Monster Hunter is a known quantity — the kind where you confidently know where you stand with it — there are plenty of people who haven’t tried it yet or might have things finally “click” with Rise in particular. It’s great that there is a PC version at all (even if it’ll be almost 10 months late), and it’s even better that there’s a PC demo.

That said, the demo is not necessarily as enticing now that we know Capcom won’t have cross-saves — and, to an arguably lesser extent, cross-play — in Monster Hunter Rise‘s PC version. If you’re a player who’s thinking of double-dipping for the performance and visual-fidelity gains over the Switch edition, you’ll have to start from scratch on PC, and that means taking on a lot of early hunts you’d probably happily skip if given the choice.

Without a Switch save data transfer, Rise‘s PC version is an easy pass for me, but I still downloaded today’s demo just to see how it runs. (If you’re curious, it’s 6.72 GB.)

I popped in and didn’t notice any technical issues with my  i7-7700K and GTX 1080 Ti setup. The demo ran flawlessly for me and looked pretty good. The higher frame rate alone is going to be worth it for some players, and while I still think this looks like a souped-up Switch game even in the best of circumstances, you can’t beat this gameplay format with the added maneuverability of the Wirebug and Palamute companion.

I do miss Monster Hunter World‘s sheer spectacle, but Rise is sooo easy to sink into. 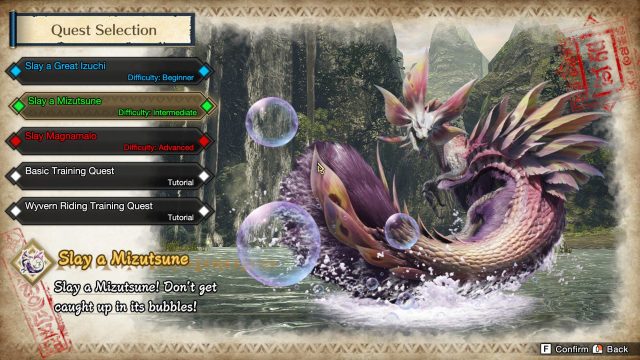 Thankfully, the PC demo has a beginner, intermediate, and advanced quest — hunting a Great Izuchi, Mizutsune, and Magnamalo, respectively — as well as training quests.

You can play alone or, better yet, slay these beasts with three other players. The PC version of Monster Hunter Rise can be played with a controller or keyboard and mouse, and there’s support for voice chat, ultrawide, “uncapped” frame rates, and up to 4K resolution.

Following the Steam demo’s release, Capcom noticed “player character flickering on the Character Select screen after selecting a quest, when using certain AMD Graphics Cards.” The developers are looking into the issue with AMD, but noted that the flickering doesn’t extend into actual gameplay. Other players are reporting crashes and failures to boot.

I’d be curious to hear your thoughts if this is your first time with Monster Hunter.