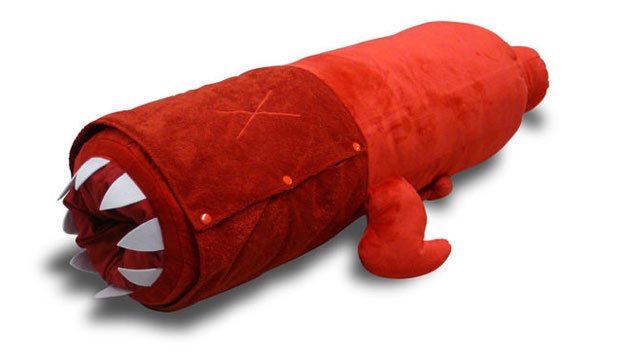 Uh … yeah, I don’t know about that. Look, I like Monster Hunter and everything, and I’m all for merchandising the hell out of it. Some of that stuff is pretty dope. This pillow based on the game’s Furu Furu monster, however …

Well, you might be able to sleep on that. I have enough trouble finding my way to snoozeland as it is. The last thing I need is to have this death snausage lurking in the dark somewhere. What’s with that collar thing around its head? I’m guessing that’s its head. There are feet and wings too, which doesn’t make for a lot of appendages, but it’s more than you’ll have left when you wake up next to this dude.

The pillow is 105cm long and 28cm in diameter, and the aforementioned collar is easily removed for washing. Capcom says it’s there because that’s the spot that’s most likely to get dirty. (???) Its mouth also functions as “a pocket” for storing your PSP, sleepytime provisions, or whatever body parts it happens to bite off in the night. There’s also an equally nightmarish white version available, and both will retail for ¥9,240 starting in January.