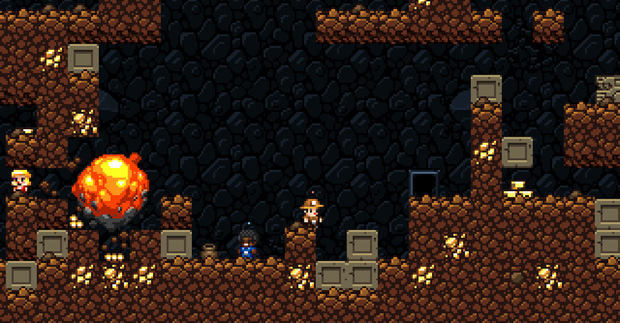 Thanks to a new mod released by YellowAfterLife, it’s possible to play the original Spelunky cooperatively with another player online. Heck yeah! Download it here for free.

The mod, Spelunky SD, also offers some bug fixes, tweaks like “being slightly more forgiving on input precision” and “enemies ‘blinking’ when about to get up,” plus “endless chat commands for changing the way levels are played or even just messing around.”

YellowAfterLife has spoken about the project and it sounds nightmarish at times. For instance, after adding a second player to the game, nothing acknowledged its existence. Traps wouldn’t go off; enemies wouldn’t react. And migrating Spelunky Classic to GameMaker: Studio? Bugs. Lots of bugs. “Dealing with these two things included changing thousands of lines of code, and spanned several weeks,” he wrote in a blog post.

But there could be more on the way for Spelunky SD. “It would be nice to allow the game to support more than two players. It would be nice to have a PVP mode (akin to Spelunky HD). It would be pretty great to get level editor and sharing back in, as well as some other forms of extensibility (to let the fun last even longer). Although right now a semi-distant dream, it would be great to have this work on Mac and Linux too (and maybe something else as well). And endless count of smaller things that matter.” The question is “when.” Not anytime soon, I’d wager.

Filed under... #2D#cooperative#Mods#multiplayer#roguelike#Spelunky#Things gamers do