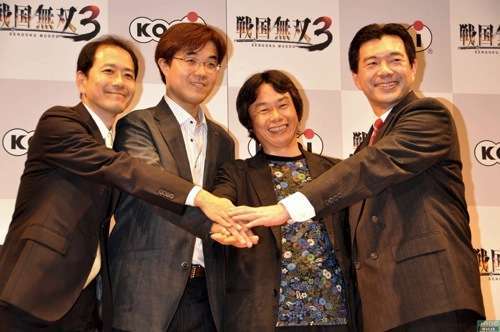 Shigeru Miyamoto showed up at a recent Samurai Warriors 3 event, which seemed random at first, but makes sense after a little digging. Apparently, Miyamoto was the producer of the Famicom Disk System title Nazo no Murasamejou, and Samurai Warriors 3 will have a mode based around that game. While this not quite a Nintendo/Koei collaboration, it’s pretty damn close. Crazy.

So yeah, Miyamoto showed his face at a Samurai Warriors 3 event, but what about the game? From what I’m hearing, it sounds amazing; 35 playable characters, over 40 enemies on screen (take that, Dead Rising:CTYD), and get this, potentially no motion controls. It’s still in discussion, but this game may designed to work only with the classic controller, with prerequisite classic controller bundle to follow. This is great news if you ask me. Some games are a good fit for the Wii not because they’re suited to motion controls, but for the Wii’s large install base and low development costs. Just as not ever DS game needs stylus controls, not every Wii game needs motion controls, as the sales of Monster Hunter 3 and Super Smash Bros. Brawl have proven.

OK, time to jump off my high horse. Hit the jump for screens of the game in action, and tell us what you think in the comments. Will this “hardcore” Japanese game sell on the Wii? Do you plan to give it a shot? And what the hell is up with Miyamoto’s shirt? It looks like it’s made out of lifesavers and gummi bears.