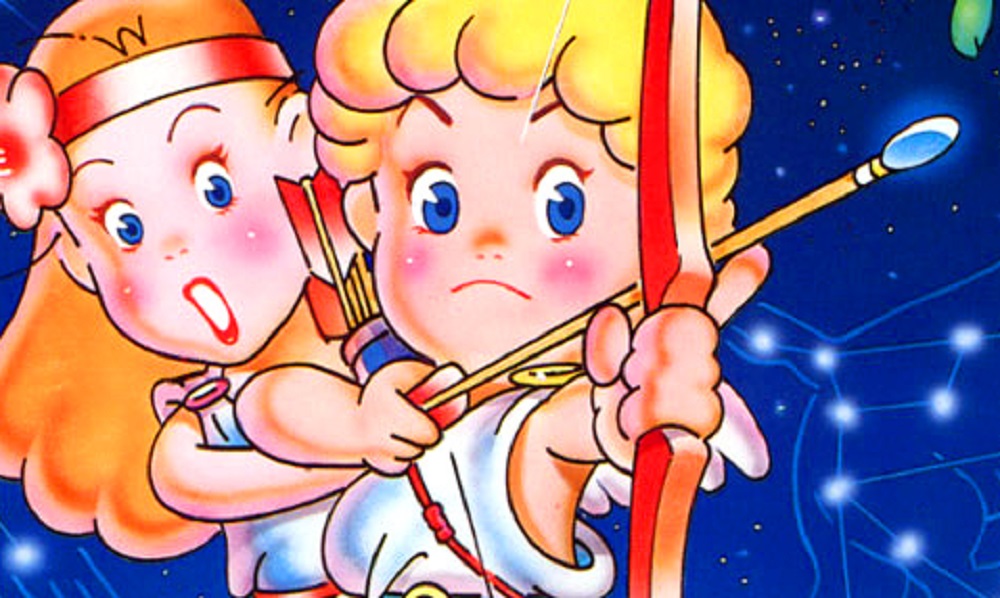 Must be talking to an angel…

The retro gaming aficionados over at Hamster are continuing on their current trend of pulling out bafflingly bizarre and outrageously obscure arcade titles for your approval — And this week’s entry is no different, with the arrival of Nichibutsu’s unique, star-gazing… shmup? Mischievous Angel.

Released to arcades in 1984, (as Itazura Tenshi), this surprisingly novel little release sees the player don the wings of a starbound angel, who is tasked with recreating the constellations in order to impress his pretty angel pal. Using non-linear, eight-way directional gameplay, our heroes travel through a gridded starscape, lining up stars in a “dot-to-dot” fashion in order to complete various famous star signs and constellations, such as The Big Dipper… umm… Jerry The Cowboy… and… Alan… The Cowboy.

As the not-so-mischievous angel lights up the sky, they must also avoid attack from sensible villains such as alien invaders, witches, and flying jesters. Fear not, as grabbing a bow and arrow will offer up temporary firepower to fend off these ne’er-do-wells. Because he’s also Cupid?.. or Kid Icarus?.. or something. Following several cosmos of action, our young lovers must be reunited in a recurring bonus stage so wholesome and melancholy that is has to be seen to be believed.

Mischievous Angel is, despite its admittedly dated mechanics, a pretty unique and cute take on the shmup genre, with a delightful concept and some sweet visual design ideas. While hardly a smash hit of the arcade circuit, it is undeniably an original idea, and it is nice to see this quirky release curated in the Arcade Archives range.

Mischievous Angel is available to download now on PS4 and Nintendo Switch, priced at around $8.