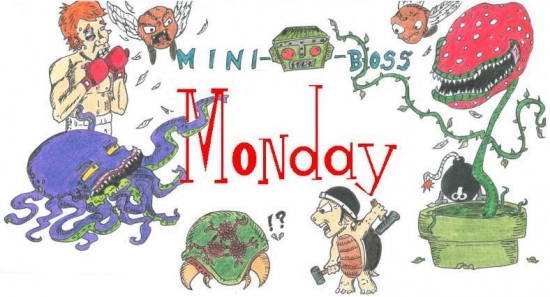 (This super-sweet logo is brought to you by the artistic vision of MrJunko. Head over to his community blog and check out his other works.)

Today’s Miniboss Monday is a special one, to be sure. I’ve rounded up three — yes, three — memorable bosses for your pleasure in penance for my absence these past two weeks. We’ve got an enormous eight-bit enemy, a dangerously dynamic delightful demon, and a sadisticly scary sword-swinging scoundrel

Abundant alliteration aside, these three bosses are extremely diverse and I’m sure at least one of them will strike a nostalgic chord with you, no matter what type of gamer you happen to be. Classic gamers? You’re covered. RPG fans? Check. Frustratingly hard boss fight cravers? You bet!  We’ve got it all!

Niero himself requested I use this boss in one of my future Miniboss Mondays, so here he is. Niero explained that this boss was so memorable for him because there was nothing like him at the time. He’s right. Mecha Dragon was one of the largest bosses in the early Mega Man days, and one of the most platform-heavy.  Many controllers were broken at the hands of this boss, and for good reason. Three tiny blocks? That’s it?! Yep, that’s all. Good thing this fight follows the same mantra as the rest of the fights before it; use the right weapon and it ends quick.
I believe we owe a moment of silence to all the controllers this boss had claimed (as well as all the TVs that said controllers were thrown at.)
Boss #2: Spekkio (Chrono Trigger)
Spekkio is the lovable, eccentric god of war that predates Kratos in the chronological book of gaming. His true identity is a mystery due to his appearance is ever-changing based on the strength of the foes before him. However, many classic RPG fans accept his “koala” form as his main likeness because most who reach him for the very first time will see that form. Shown above is a fight against Spekkio’s final form; the dreaded pink Nu. Do NOT be fooled! This boss can be rather challenging. Remember; life ends and begins with Nu.
Boss #3: Nelo Angelo (Devil May Cry)
And finally, we have one of the baddest mamma-jammas this side of Hell. I mean, come on, this guy would give Bram Stoker the heebie-jeebies. Nelo Angelo is a demonic swordsman from the original Devil May Cry whom you encounter on three occasions throughout the course of the game. Above is the final encounter with this ridiculously hard boss played on “Dante Must Die” difficulty. I believe I speak for everyone who has ever faced this Nightmare-esque beast when I say “Holy crap, this guy is impossible.”
How did you first encounter with Nelo Angelo go? I’m assuming it wasn’t anything like the video above, of course.
Anyway, that’s all for this week’s Miniboss Monday. If you have any suggestions for future bosses to be profiled, please give us a ring on the Destructophone and send us an e-mail to [email protected]!