Last weekend, the Japanese Splatoon community went to battle in their latest splatfest, held on Nintendo’s messy Switch shooter, Splatoon 2. This particular fight was sponsored by Glico’s foodstuff Pocky, the brand of cookie your anime-loving pal eats in a desperate attempt to be one step closer to Japan.

The line was drawn between two types of Pocky stick, “Regular Pocky” vs “Extremely Thin Pocky”. No contest, right? So imagine the implosion that took place in my tiny mind when Marina’s Team Extremely Thin Pocky took the 2-1 victory. This means that the majority thought having LESS biscuit and chocolate was the better option!!

Marina’s team took both the public vote – by 57% – and Regular Play, with Pearl’s Team Regular Pocky pulling back a point on Challenge Play. I’ve seen some bizarre results in my time reporting on these splatfests, but choosing the lesser option of a tasty treat takes the cake… or biscuit. 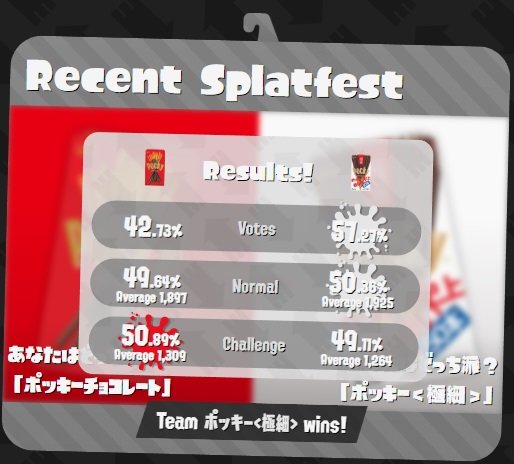