Yeah, I took the low-hanging fruit in the headline

Developer Monolith’s ambitions for Middle-earth: Shadow of War are high yet predictable. In a hands-off demo in San Francisco, a representative outlined a bunch of gameplay changes that will define this title. It’s the exact same route all big-name sequels take: More, more, more. We can’t yet say if it’ll be for better or for worse, but we feel comfortable asserting that feature creep is the main attraction.

Shadow of War’s intentions aren’t masked for long. Within 30 seconds, we’re told “We wanted to expand the scale of everything. There are more epic stories and a much more massive world.” A setting so massive that there’s now a world map because “We have many more regions. They’re far larger than they were in the last game, and they also extend beyond Mordor.”

We all see exactly where this is going.

The bulk of our presentation was focused on combat and all the additives that accompany it. Shadow of War‘s major encounters will be Nemesis Fortresses, strongholds that control the different regions of Mordor. Rule the fortress and you rule the region (each region “significantly larger than anywhere we had in Shadow of Mordor“). What’s unique about the fortresses is that the leader influences the entire region’s society and culture. For example, a feral tribe will emphasize hunting/trapping/taming/using creatures in battle, while a mystic tribe will specialize in dark magic like necromancy.

Each fortress is run by an overlord, one orc rank higher than the warchiefs of Shadow of Mordor. Although, in order to approach the overlord, his warchiefs will have to be defeated. And, each warchief brings their own special modifiers to battle. In our demo, one had a cursed weapon that disabled some of our powers; another was fire savvy and made it so the orcs were equipped with flaming arrows, fiery trebuchets, and boiling oil.

This embellishment of the enemy’s forces is reciprocated on the protagonist’s side. The Ranger is accompanied in combat by some followers, a group of orcs who are willing to fight on his side. We were shown a Demolisher who “is basically a living battering ram,” good for helping us smash through gates; an orc who’s riding a fire-resistant mount (they ride mounts now); and a sniper spy who has infiltrated the enemy ranks. Of course, those circumstances — and all circumstances — are completely different for each player because of the game’s Nemesis system. 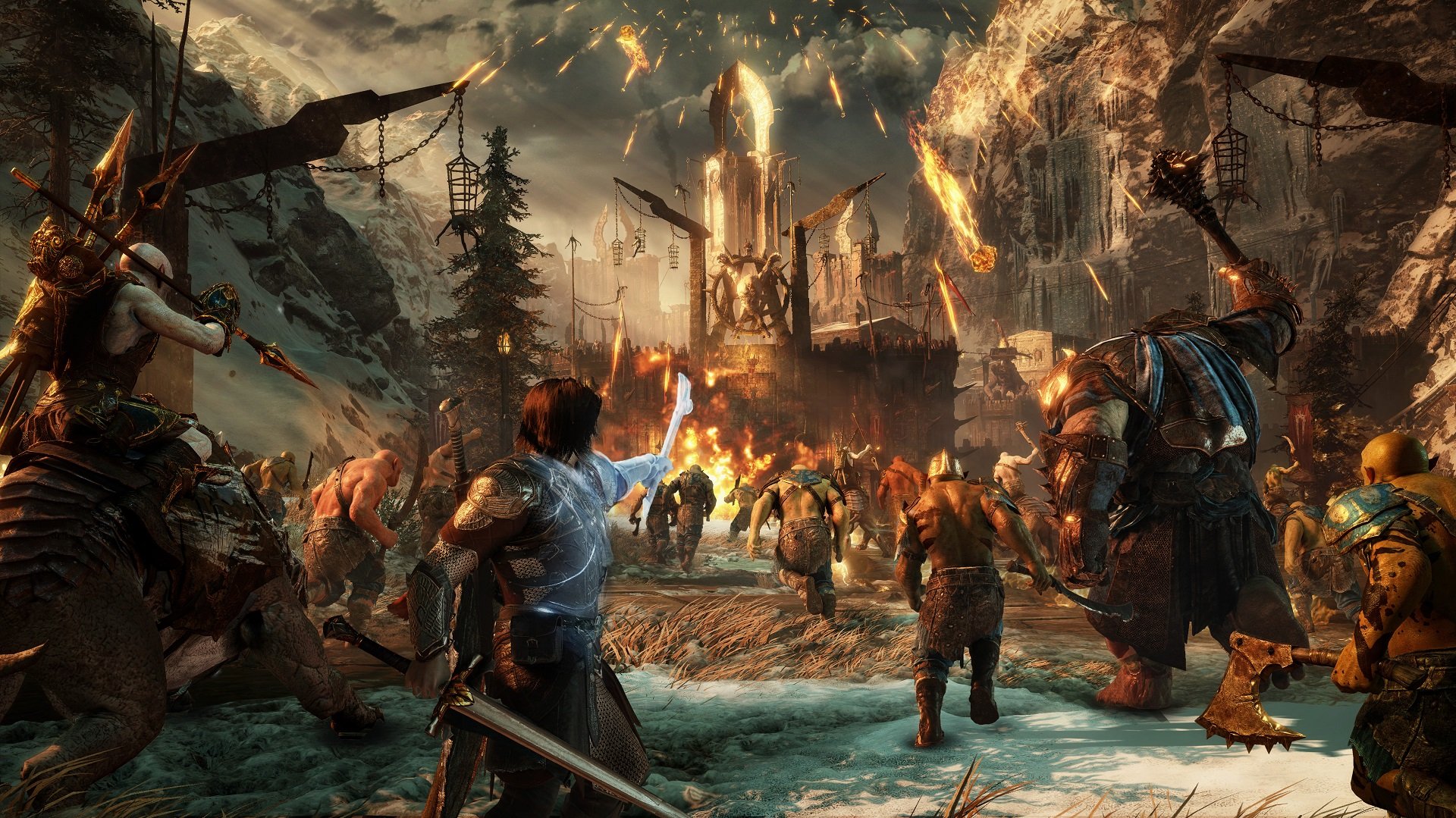 Ah, the Nemesis System. The defining feature of the previous game. This too is being overhauled in the name of amplification. Now, more types of stories can exist. “In Shadow of Mordor, the Nemesis System’s most memorable stories were really around bloodshed and revenge and hunting down the guys who killed you,” we’re told. “But now by expanding enormously on the followers, it opens us up to have a whole range of new types of stories. So now we can have stories of savior, stories of betrayal, stories of loyalty, even stories of friendship.”

The example we’re given is an interesting one. Stormbringer, one of the warchiefs, used to be an ally of ours. He was a casualty of a rescue mission and was unfortunately left for dead. As it turns out, he cheated death but feels pretty betrayed by how we treated him. He holds a burning grudge, a giant orc-sized chip on his shoulder. Rightfully so, to be honest.

It’s a lot to process in 15-or-so minutes but that’s unique to our situation. As is pointed out to us, we’re on the cusp of launching a major assault. In practice, getting there could take hours of preparation and planning for a meticulous player. It’s the culmination of a lot of sandbox gameplay. 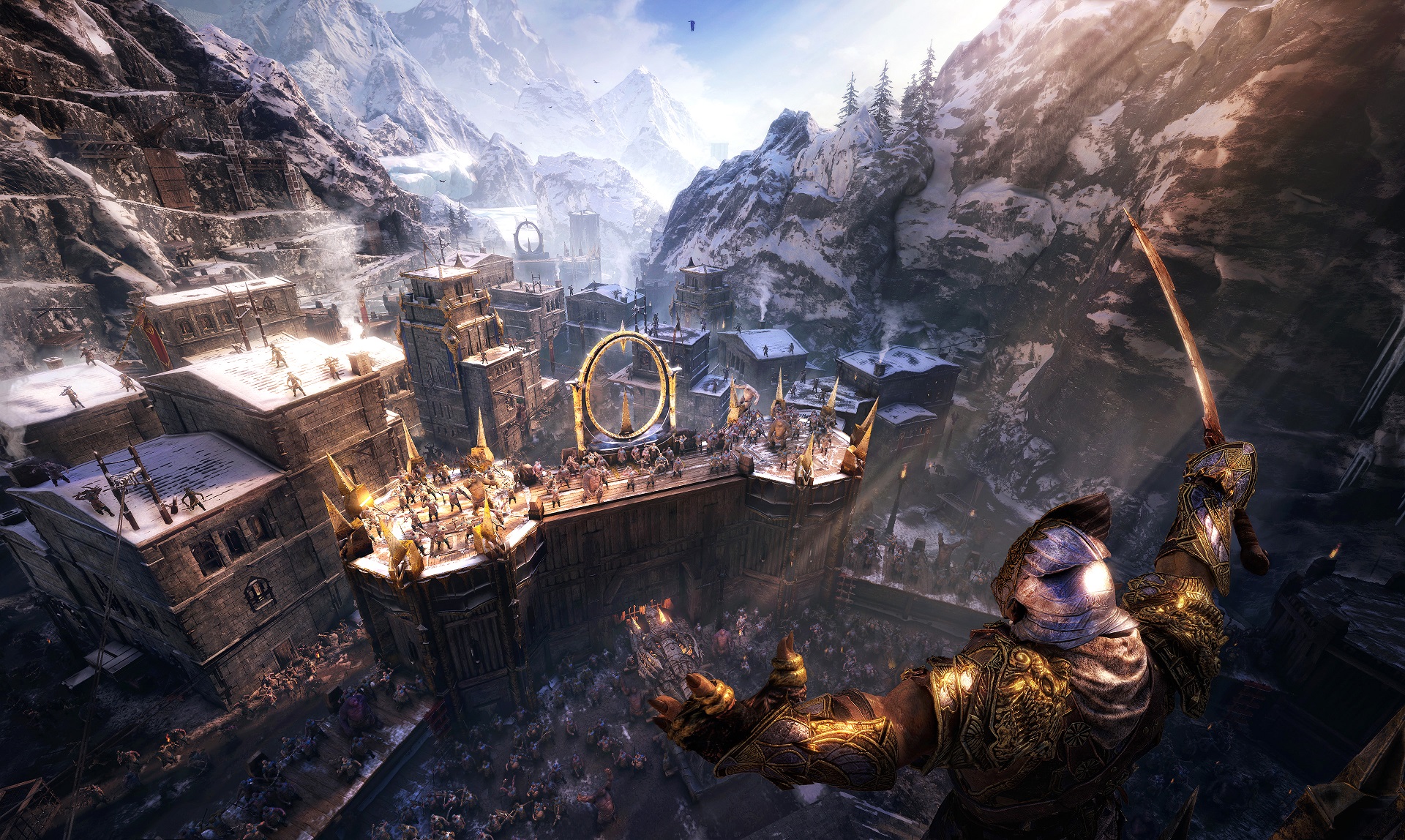 But, for all that’s new, it looked familiar again when we finally got to the heart of all of this. Shadow of War is just as stylish and grotesque and extravagant as its predecessor when it comes to lopping off orc heads. Its cinematic qualities again make every dead orc feel like an event until you remember that you’ve already done that a thousand times. There may be a lot more to it all, but it’s also pretty fucking great watching the Ranger mow his way through an army of goblins with a calm and collected flair.

The sequence ended with us defeating the overlord and appointing one of our own as the new ruler of the region. We chose a fellow from a looting tribe, the idea being that he’ll earn more money for the area. With that, we can expand the size of the fortress and make it more secure from inevitable attacks. This is a microcosm of the manifest destiny of open-world games: Always get bigger, always expand.

As much as it pains me, I’ll draw from a Tolkien reference to describe Middle-earth: Shadow of War. If Shadow of Mordor was The Fellowship of the Ring, then Shadow of War is The Two Towers — specifically Helm’s Deep. The scale of everything is so tremendously grand, far more than anything the series has shown us to this point. A worst-case scenario would be that this ends up as subtraction by addition. Something tells me that probably won’t happen, though. A detailed and fleshed-out world is exactly what most Tolkien fans want.