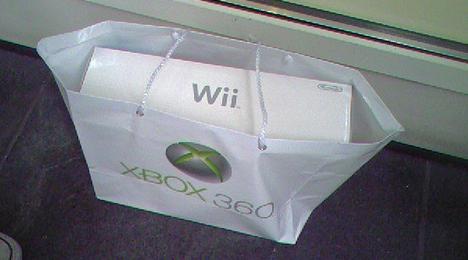 At the recent D5 conference in Carlsbad, California (yeah, I hadn’t heard of it either), Bill Gates made some very strange, somewhat confusing statements about the future of the Xbox 360.

Similar to Peter Moore’s comments a few months back, Gates seems to be hinting that the Xbox 360 may jump on the motion-controlled bandwagon and offer an experience to compete with the Nintendo Wii. Says Gates:

… imagine a game machine where you’re just going to pick up the bat and swing it or the tennis racket and swing it.

Actually, I can do more than imagine it, Mr. Gates. I have something that does just that sitting in my entertainment center as we speak. I must be so ahead of my time!

To add to the confusion, when questioned about why that cryptic statement pretty much described the currently available Wii, Gates replied:

No, that’s not it. You can’t pick up your tennis racket and swing it.

While these comments (paired up with Moore’s) do not prove anything, their existence alone may signify that some kind of motion-sensing control for the Xbox 360 really is on the way.

It also makes you wonder what else Microsoft has up its mysterious sleeve. How about an innovative handheld device with, count ’em, two screens, one above the other? I think it could work.