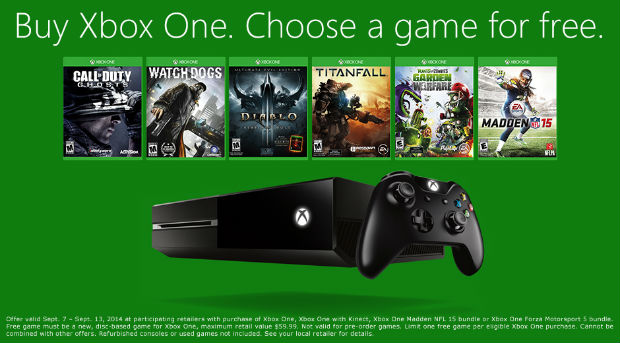 If you’re keen on buying an Xbox One soon, Microsoft has a deal going on next week. From September 7 through September 13, if you buy an Xbox One from “participating retailers,” you can get a free game.

Exact details aren’t given as to how you’ll be able to redeem the promotion (“see your local retailer” is the suggestion given), but Microsoft notes that any game at $59.99 and under will be eligible.

Looking for suggestions? Diablo III: Reaper of Souls, Plants vs. Zombies: Garden Warfare, Assassin’s Creed IV, Dead Rising 3 are great retail games that you can get the full promotion from.

Destiny is also out next week, but since servers won’t be switched on until launch and no one can review it, I’d recommend that you wait for some opinions before you buy it.