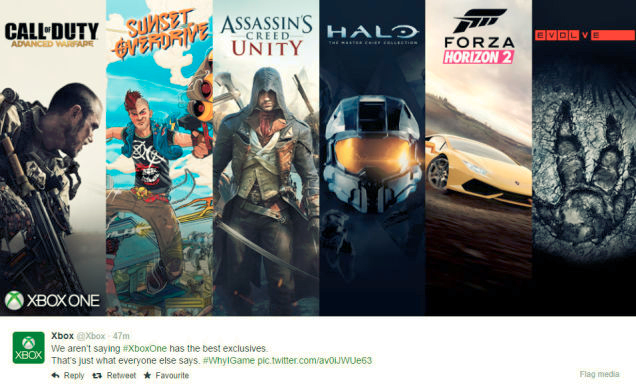 Apparently Call of Duty and Assassin’s Creed are exclusives now

Microsoft doesn’t necessarily claim Xbox One has the best exclusives, but a recently deleted tweet from the company did seem to suggest as much. Apparently “everyone else says so” — which is, um, an interesting statement. I reckon plenty of folks might respectfully, but vehemently, disagree with that assertion.

Also, never mind the fact pictured titles Call of Duty: Advanced Warfare, Assassin’s Creed Unity, and Evolve are all coming to PlayStation platforms and PC. Oh, and let’s not forget there’s a Xbox 360 version of Forza Horizon 2 in the works. Good job, though, Microsoft! Good effort!