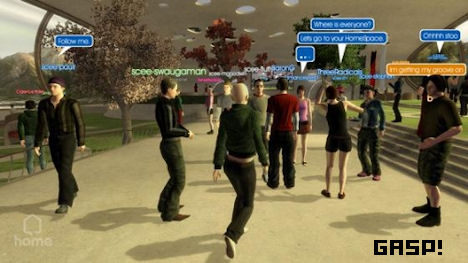 Sony’s long-awaited Home is released today! Only joking … it was never awaited. Nevertheless, Sony has invested a lot into something that nobody ever really asked for, and its sort-of-social-thing is now ready to be enjoyed by PS3 owners the world over. Microsoft’s Aaron Greenburg, however, is unimpressed. Looks like he won’t be rushing to download it.

“What Home to me feels like is Second Life for hardcore gamers,” stated Aaron, not mentioning how the New Xbox Experience feels like a Wii for hardcore gamers. “It doesn’t feel like it broadens the experience and invites people in. When they unveiled it, it seemed innovative. I think what’s happened is now here we are a couple of years later and we feel beyond that.

I don’t think it’s the “tech” aspect of Home that people find uninspiring, more like the fact that it looks like a console-based advertising network at worst, and a waste of everyone’s time at best. Still, it’s probably going to be a bit more useful than Microsoft’s own avatars have been so far. At least there’s that.