Earlier this week, my neighbors were likely unprepared for me belting out the words “I don’t love you hoes… I’m out the do’.” And the girl walking her dog outside, in front of the ceiling-high windows of my living room? Who knows what she thought when she saw me shouting “Oooh, baby, baby… baby baby” at my television set.

I was, of course, playing the upcoming hip-hop and R&B rap-themed “karaoke” game, Def Jam Rapstar. The songs I was performing, Snoop Dogg’s “Gin & Juice” and Salt N’ Pepa’s “Push It,” respectively. Yes, there’s video of this, thanks to the game’s video capture and editing features. No, you don’t get to see them… yet.

For reference, it’s easiest to think of Def Jam Rapstar as the Karaoke Revolution for fans of hip-hop and R&B. But it’s obvious that developer 4mm Games (along with Terminal Reality and Def Jam Interactive) is doing a decent job of pushing beyond the dusty skeleton of Konami’s now tired franchise. (Coincidentally, Konami happens to be publishing Def Jam Rapstar.)

Gameplay wise, it’s exactly what you’d expect. Its core is a sing-a-long game, with lyrics displayed on the screen in the classic karaoke fashion. For the rapping portions of the tracks, a bouncing ball follows along the words, sometimes broken up into syllables depending on the rhythm and flow. For parts of the tracks with traditional sung vocals, anyone who’s played any karaoke game will feel right at home, with an arching line indicating pitch that appears along with the lyrics. 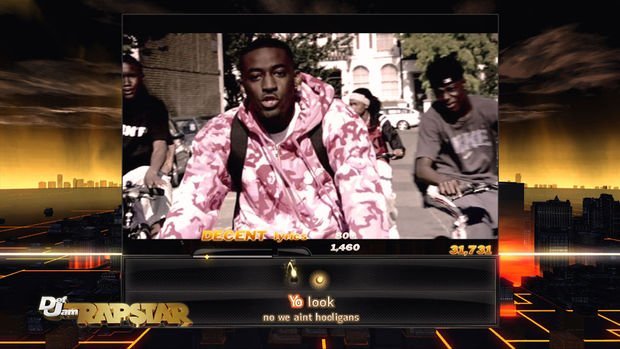 Rapstar seems to do a pretty job of tracking both pitch, flow, and lyrics, too. You won’t be able to just spit gibberish, especially on some of the game’s higher difficulty levels. Both sung notes and timing of lyric delivery are tracked, judging you “Dope,” “Decent,” “Rough,” or “Weak” depending on your performance. On the easiest difficulty levels, you’re given more leeway on missed notes and lyrics, but you’re not left entirely off the hook. Pulling a page out of my time with Inis’ Xbox 360 karaoke game Lips, I dragged my mic along the carpet to see if Rapstar would praise my “performance.” It didn’t. Rubbing your microphone on the ground is apparently “weak” in the hip-hop game. Who knew?

The title is broken down into a few modes, including Party (for, you know, parties), Freestyle (blank canvas beats written by top hip-hop producers), and Career. During my time with the game, I headed right into the Career mode, broken down into a stages which are unlocked as you earn more microphones. Microphones are earned based on the quality of performance. Kill it, earn five microphones. Scare the young lady walking her pug with your performance of an 80s rap classic, you’ll earn one.

Each stage is made up of a handful of tracks, and it doesn’t seem necessary to sing all of the tracks, you’ll just need to ace enough performances on a few to unlock the next tier of songs. I steered away from Lil John’s “Get Low” because I didn’t feel like shouting “skeet” repeatedly, and I still managed to advance. You won’t just unlock new songs, either — the career will also feature challenges, where you’ll be tasked with besting a certain score or being on point with your delivering and timing on a set number of measures. 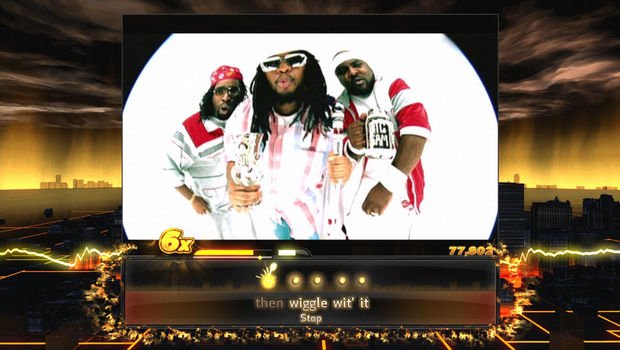 It should be noted that it seems like all of the game’s licensed tracks that I played were the music video versions of the songs, with the clip playing in the background as you perform. This means you can expect all of the song’s profanities (and many drug and sexual references) to be stripped from the track; the game is rated T, after all. If you’re already familiar with the lyrics, feel free to blurt out the offending words and the game won’t dock you. But if you’re less familiar with the track, a series of dashes and lines in place of a word can be a bit jarring, especially given the speed at which lyrics can sometimes come.

Another thing to consider is that many rap videos feature long intros, interludes, and outros. These skits are often hilarious (it had been years since I’ve heard someone tell Snoop Doggy Dogg to get a jobby job; it’s still funny!), but if you’ve seen them once, you’ve seen them a million times. Fortunately, Rapstar will allow you to skip them with the press of a button, quickly queuing you up to the next spot in the song where lyrics come in.

Def Jam Rapstar also seems to take a page out of Sony’s Singstar playbook, offering up the ability to not only record parts of your performance (using the Xbox Vision Camera or PlayStation Eye), but to also share that video with an in-game community. It also offers up fairly robust video editing tools, allowing you to place animations and stickers on your videos, as well as add various other effects to the clip. It’s easy to use, utilizing sliders for size, transparency, colors, and more. You can even layer stickers and animations, which could lead to some interesting clips, should someone want to take the time to spice things up. At the outset, only a handful of these video “flair” items are available to you, with more unlocked as you play through the game’s career. 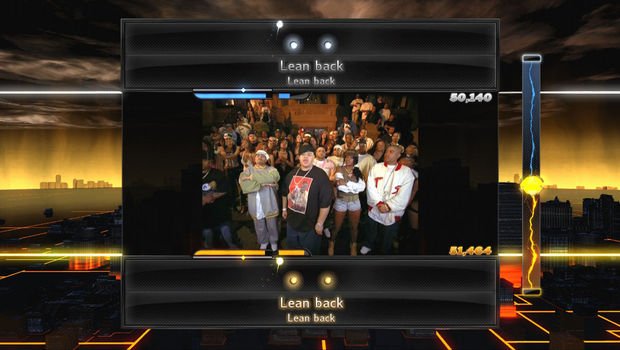 While I had access to the game’s community (which is fully built into the game, accessible from the front end menus), it’s hard to get a sense of what to expect from folks once they get their hands on the game. Let’s just put it this way: P. Diddy’s not going to want to sign any of the dudes doing QA on Def Jam Rapstar. But once the game does ship, I expect it to be packed with undiscovered potential and talent. Clips will be broken up into featured performance, hottest videos, most recent uploads, so it should be easy to keep up with the new hotness on a weekly or daily basis.

Let me be frank: I may be the farthest thing from a Def Jam rapstar as one gets. I’ve been listening to hip hop for about as long as I can remember, but if someone put a gun to my head, I couldn’t pull three lines from 2Pac’s “I Get Around” out of my ass. I’m more of a “check me out, I can hum every solo from Slayer’s Reign in Blood album!” kind of guy.

But there’s no doubt that 4mm’s got something here with Def Jam Rapstar, filling a hole in the videogame music scene that’s long been empty (the music gaming atrocity Get On Da’ Mic notwithstanding). And once I let myself go, ignoring my neighbors and the wide-eyed dog walker, it was on. I got my flow. I was a rapstar, if only for a few hours. And maybe — just maybe — you’ll find a video of me performing “Gin and Juice” online when Def Jam Rapstar ships October 5. No promises.