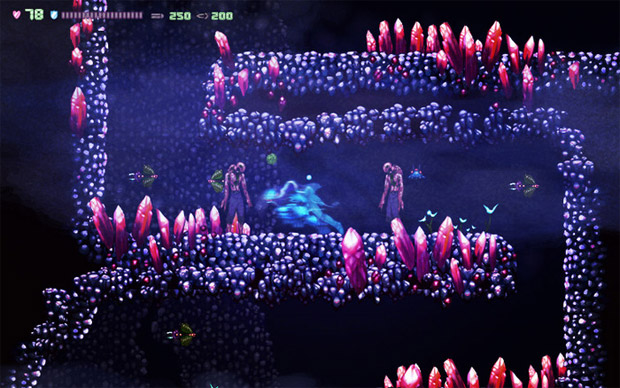 The Metroid-inspired Ghost Song: A Journey of Hope quickly cleared its base funding goal of $15,000 on Kickstarter, which makes me happy. Like a total chump, I forgot to chip in; this keeps happening. Regardless of that missing contribution, plenty of stretch goals were met.

There’s going to be a Hardcore Mode for seasoned players that has things which otherwise can’t be found in the normal difficulty; an enhanced pet system, allowing you to feed and evolve your companion not unlike Mags in Phantasy Star Online; and Overtime Mode, a shorter campaign featuring a different character and play style that revisits crucial story moments.

Regrettably, the $60,000 goal for a Wii U version of Ghost Song was not funded. There’s hope yet, according to developer Matt White. “I’m working to make this happen anyway,” he wrote in an update. “That’s not official, but it’s a desire of mine and I hope to have that out at some point, if not at release, then following release.” PC / Mac for now will do just fine.

Hell, if the game comes out, does well, and people really do want an eShop release, I don’t think that’d be too tough a sell. There could even be another Kickstarter for that and that alone.

Here’s a promising developer walkthrough, if you’re not yet sold on Ghost Song‘s potential: