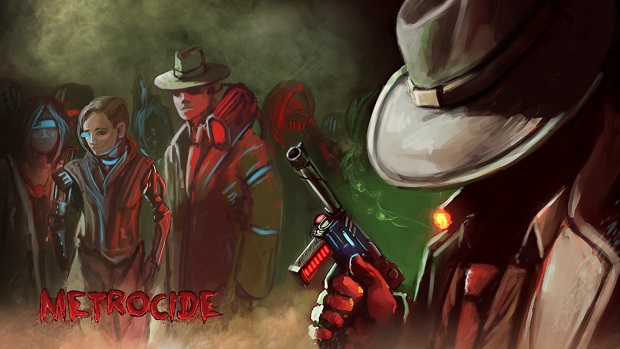 In the grim, futuristic world of Metrocide, your objective is simple: raise enough money to escape the city, one zone at a time. You’ll accomplish this by accepting contracts and skillfully executing your victims, leaving as few witnesses as possible. Each time a body is discovered or a crime is witnessed, cop drones will begin to patrol the area and can never be removed, exponentially raising the stakes for your next kill.

When choosing a target, you’ll be given pertinent information about your potential victims such as their personal habits, psychological profile, and if they are known to be armed. Facts like the victim being a smoker could give you a clue that they will periodically stop to light a cigarette, opening an opportunity to make your move.

As you accumulate cash by dispatching citizens, new weapons and tools will be unlocked that you can purchase to help with the next job. A clever example of this is the holographic lure, which can be used to draw unsuspecting victims into alleyways, free from patrolling drones and the watchful lenses of security cameras. Weapons such as the shotgun also become available as you progress, but if you are found with illegal items on your person they will be confiscated and you’ll receive a hefty fine, or if you’re unlucky enough to be caught short on funds, you’ll be shot dead in the streets. In the ruthless dystopia of Metrocide, an inability to pay fines is punishable by death.

The developers leave off with T.J. Trench getting careless and botching a kill, thus drawing in the deadly cop drones which make short work of our would-be assassin. Permadeath makes the world of Metrocide unforgiving and the gameplay itself is only simplistic in principle, demanding ever more caution from the player as the stakes get higher and higher.

Metrocide will be coming to Steam Early Access for PC and Mac in mid-October at a reduced price of $6.99, with the full launch planned by the end of 2014.