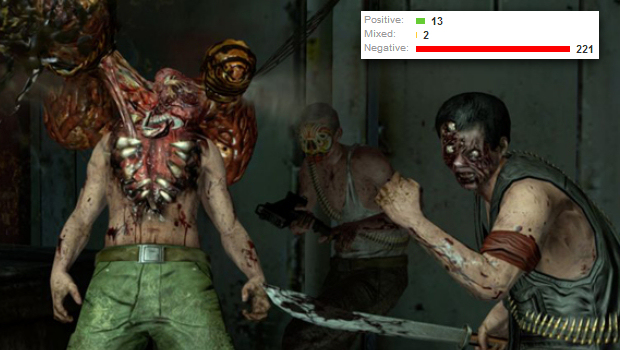 Yep, it’s happened again! Resident Evil 6 is the newest game to be torn to shreds via Metacritic’s user reviews, following a rare instance of there being a large number of press reviews that agree with the fan rage. The game currently stands at 221 negative reviews to 13 positive. Ouch.

Our old friends at the Cult of Biboran have joined the slaughter, doing to Resident Evil 6 what they’ve done to other games like Darksiders II. It’s not just the Russian cultists though — there’s a cavalcade of rage, ripe for the plucking, so let’s get picking these tasty fury apples!

As always, the best reviews are provided below for your pleasure. Enjoy the sweet taste of hard-hitting journalism!

“NO FEAR NO RESIDENT! Looks like the freaking call of duty! Resident evil must be better than Dead Space, a epic scary game! but this is a stupid action game! Shame on Capcom!Capcom you finally destroy the series maybe you can rename the game as Resident Evil Black Ops. -_- F%ck you Paul W. S. Anderson this is your fault. lmao.” – iM0RNiN6ST4R

“Don’t listen to the blind fanboys, this game sux hard, it look like a PSP game ported to HD consoles, the gameplay is awful, just look to THE LAST OF US and you will see a real sorvivor game, keep your money for a better games, if you buy it Crapcom will kill the next games, and RE7 will suck even harder than this mess;)” – blablabla33

“Resident Evil 6 is a Michael Bay movie. There’s really no more polite a way to put it. Stuffed to the gills with bombastic action segments, car chases, and relentless chaos, Capcom has abandoned any pretense of the survival horror genre and embraced a world of skin-deep Hollywood audacity. Listlessly wallowing in the depthless waters of homogeneity, Resident Evil 6 is a coward of a game, afraid to make its own individual mark in the industry and cravenly subscribing itself to every overplayed trope in the book. What a brilliant indicative summation of this gen. I’ll go back to my PS2 folks. Godhand anybody. Oh and Haunting Ground, Capcom, **** YOU FOR RUINED THIS GREAT FRANCHISE!“ – kanako666 (some of this seems familiar!)

“This is not a Resident evil anymore!! the badest resident evil of all time. no horror… just action.. BAD action with stupid story. RIP Resident evil!“ – Trollolololol

“I apologize for having a retarded name but I feel very stupid compared to the geniuses who made this game. I have fapped and masturbated for hours now, ada and sherry they both look gorgeous I wish my gf was that hot but she suck she is ugly and fat, thanks to this game I learned that no matter how much your life suck, you can always enjoy it if you play RE 6. Buy it now and dont feed those trolls who rate it low, they only want attention.” – bandersay000

“SONY is not the LAW – BIBORAN is the LAW !!! SonyWhore Japs sold their souls to the god-devil Abdulov again and made insane SHIxT to drag money out of retarded school kids (aka Maslyata). ANSHA ABDUL Brothers ! — If you buy this pile of SHIxT – you support further shi*t-games development, dolphin killing, pedophilia and Mavrodi !” – dddxxxxxbbb

“NO FEAR NO RESIDENT! Looks like the freaking call of duty! Resident evil must be better than Dead Space, a epic scary game! but this is a stupid action game! Shame on Capcom!“ – rafaschan

“The main storyline of the **** game is full of metaphors. For example, one of characters clearly represents Soviet actor A, Abdulov, who was scum and pedophile. Idea of Japannese-Pedophilic dominance is evident throughout the game! I can see evil eyes of 731 Unit in every character model. And the main thing is desire of Sony-Whores to get our Kuril Islands to the hand of god-damned Emperor-pedophile. WE WON’T LET YOU **** OUR COUNTRY! ABDUL GREW UP ON KURIL ISLANDS AND PLAYED THERE ON THE BEEEEACH!!! ANSHA ABDUL! IF SUCH GAMES WILL CONTINUE TO BE PUBLISHED, TZUNAMIS AND PUNISHMENT SHALL BE ETERNAL! ANSHA ABDUL!! BIBORAN!! ABDULOV!“ – bubbreaoe4322

“There is much troll on this page, this game and they will destroy their multiaccounts like call of duty and diablo 3, but unfortunately did not have anything to do if not **** and put 0 to a game that, while for many has been the best work … personally has been the best game of resident evil .. varied and fun game.“ – leondaniel21

“One of the worst games i have even played,japan should stop doing games already because Capcom finally destroyed the series! **** you capcom i wish china would bomb you and destroy you!“ – alex__2

“This is a game that everyone should play right now cause it is very good and made by a good company called capcom that makes great game always and everyone and enjoys them a lot so you should too and especially not hesitate now and instead buy this excellent game cause it has good reviews and good gameplay and i love the graphics that the game has much better than Resident Evil 5 which had orange graphics.” – donkeyrabbit78