I just checked, and yes, this game is still money

Your eyes do not deceive! Tony Ponce is writing about Mega Man on the front page!

I want to talk today about Mega Man Unlimited, the fan game I reviewed nearly two years ago that made me cry manly tears. You remember that tasty jam, right? I still think about it often. Hell, I replay the soundtrack in my car like it’s a religion!

But while the world has gone back to tsk-tsking Capcom for its continued mishandling of little boy blue, Unlimited lead designer Philippe “MegaPhilX” Poulin has continued to tweak his baby with bug fixes and all-new features. I wrote about the update that added an easy mode a mere month after the game first launched, but several further updates have popped up since. The reason you haven’t heard about those others until now is because… well… I wasn’t around to tell you!

Have no fear, brothers and sisters! I am here once more! And what’s this? It looks like MegaPhilX pushed out Version 1.2.2 just a week ago, and it’s packed with peanuts! 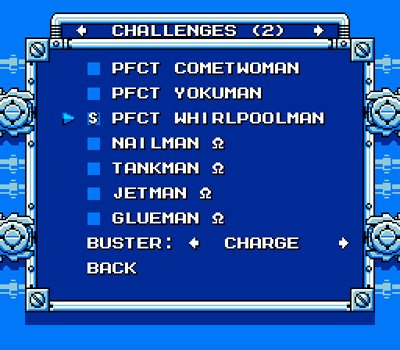 The former are self-explanatory — beat each boss without getting hit using only the Mega Buster. In Omega battles, each boss is enveloped in a sinister aura which boosts their movement and attack speed while significantly increasing the amount of damage they inflict. Should you beat an Omega Master, their weapon in the main game will have its energy consumption halved.

As I said, there have been several prior updates as well. The most significant was Version 1.2.0 last August, which added an Endless Attack Mode, like the one from Mega Man 9 and 10, and an Endless Boss Attack Mode. Also along for the ride was a tenth Robot Master, Whirlpool Man, who resides in a special stage in separate mode. Beat him and you’ll be able to use his weapon in the main campaign, just as with the Mega Man Killers in Mega Man 10.

Then there was the small yet no less significant Version 1.2.1, which reacquainted Rock with his trusty charge shot, making certain bosses much less of a headache. If you prefer to play the way MegaPhilX originally intended, though, you can disable the charge shot in the menu.

If this is your first time hearing about Mega Man Unlimited, find some time to fill that Blue Bomber-sized hole in your life. Seriously, I can’t recommend it enough. And it’s free. And it’s way, way better than Street Fighter X Mega Man. And Capcom’s not doing jack with Mega Man anyway.

Now if you’ll excuse me, I have a comic crossover I need to freak out about.