25 years of games crammed into one massive infographic

Three and a half years ago, I foolishly dedicated an entire week to constructing a ginormous infographic of every single Mega Man game in existence. My Mega Man Game History chart was well received by several outlets, and I couldn’t have been more pleased.

But with the 25th anniversary upon us, I felt it was time to expand upon the original chart, correct any errors or inconsistencies, and give the whole beast a nice spit shine. From the Blue Bomber’s beginnings on December 17, 1987, to the upcoming release of Street Fighter X Mega Man exactly 25 years later, every installment of this venerable franchise has been represented.

Boys and girls, I give you Mega Man Game History Ver. 2. 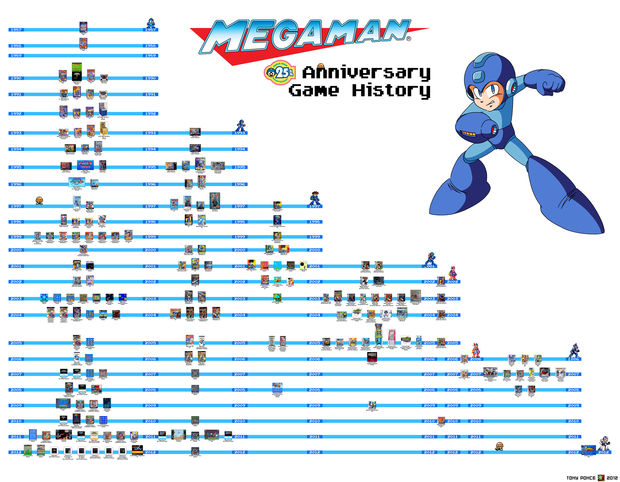 My criteria for inclusion is the same as it was in 2009, EVERY officially licensed game that plays on some kind of electronic device. That means console games, handheld games, PC games, arcade games, mobile games, and even LCD games like Tiger Electronics‘ Mega Man 2 and 3.

I also considered every port from every region, with the exception of re-issues on the same platform. For example, I included the first versions of the Rockman Complete Works titles — Japan-exclusive PlayStation ports of the original NES Mega Mans — but not the re-releases from Sony’s PSone Books budget line.

The games are ordered according to original release, whether that be in Japan, North America, Europe, or Asian territories, but are tagged with localized box art, screens, and titles when available. It’s for that reason you’ll see Mega Man 2 appear on the 1988 row in accordance with Rockman 2‘s release, even though the American version didn’t arrive until the following year.

Games from a given year were placed across a row in more or less release order. Unfortunately, specific release dates were unavailable for several games. In such cases, those games were simply appended to the end of the row. 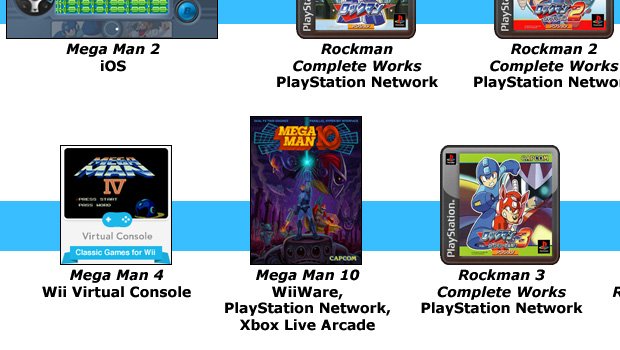 In regards to mobile titles, the same games typically launched across several different phone services, while enhanced versions on a particular service often appeared at a later date. I treated every instance of said games as single releases for sanity’s sake — information about old cell phone games is a bear to track down! However, I gave Android and iOS releases their own entries due to the greater significance of those platforms.

I likewise treated the multiple versions of Mega Man 9 and 10 as well as the various recolored models of the Battle Network / Star Force LCD digital pets as single releases. Those were purely judgment calls on my end.

But enough jibber-jabber! You want to see the chart for yourself! I’ve attached a sampler in the gallery below, but if you want to view the full 9000 x 7000 monstrosity, you’ll have to swing on by my MediaFire page. Please be warned that the original’s file size exceeds 9 MB. And if you happen to find any errors or missing games, don’t be afraid to give me a holler.

Enjoy my labor of love, friends! I guarantee you’ll be pleasantly surprised!