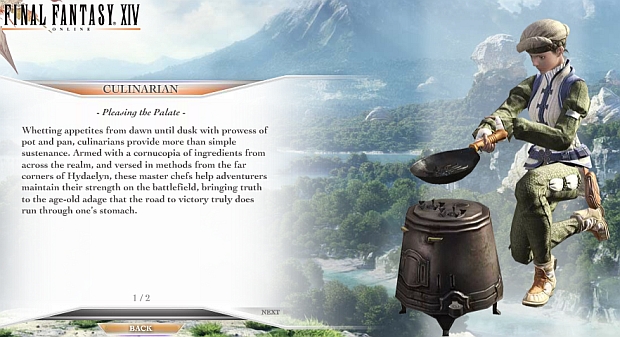 Square Enix decided to spooge us a load of high-resolution artwork for Final Fantasy XIV yesterday, but after drying off hard drive, I was disappointed to find that it was mostly shots of the Gladiator and Pugilist classes and their gear. They had forgotten to include art for what is obviously the best class in FFXIV, the Culinarian!

Therefore, as a service to you, dear readers, I used a screenshot of the Culinarian’s official site page for this header image. Look at that! The Culinarian’s primary weapon is a rune-inscribed frying pan! You do NOT f*ck around with a dude who uses that thing to cook.

There was some more information about FFXIV‘s gear-based “Armoury.” Basically it’s all based on player’s currently equipped stuff. Wear claws and cesti, be a Pugilist, rock a frying pan, be a Culinarian. Stuff like that.