Should it be worrying that every Destructoid writer so far has sided with the Sith Empire? It would appear that the lure of the Dark Side is far too tempting, so much so that we wonder whether there would have actually ever been any Jedi in real life. The Dark Side is just way too cool.

In any case, Team Destructoid has insinuated its evil throughout The Old Republic, and we’re quite proud of our villainy. What started as a simple feature showing off our characters became a thoroughly nerdy exercise in self-aggrandizing fiction. Some of us have gotten really quite invested in our nefarious little villains.

You see any of these chaps on your travels (Dark Reaper server!), give them a high five. Then run. Fast. 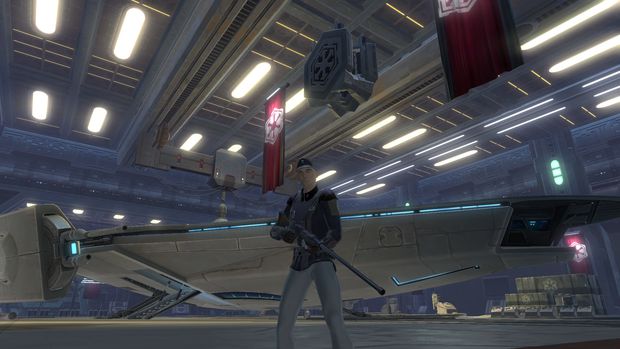 A refugee Balmorran once offered Delanynder secrets that were vital to the Imperial war effort in exchange for amnesty; instead, Delanynder informed his superiors of the situation, and suggested that they torture the man for his information. This highly esteemed agent is dedicated to the success of the Empire, and in his dedication resides a professional, efficient disposition, and a ruthlessness that demands respect and cooperation.

His mission is to seek out and destroy the power structure of an underground terrorist organization — one that threatens to tear at the very heart of Imperial order: its leadership. With the deadly skills of a sharpshooter and the aide of an Imperial Intelligence team, no enemy of the Empire is safe from swift and unexpected justice.

Thanks to his deadly and luxurious X70B Phantom-Class starship, no suspected terrorists are ever out of reach. From the seedy, gang-controlled cities of Nar Shaddaa, to the icy wastelands of Hoth, Delanynder will travel the known galaxy and destroy any who oppose the Emperor. 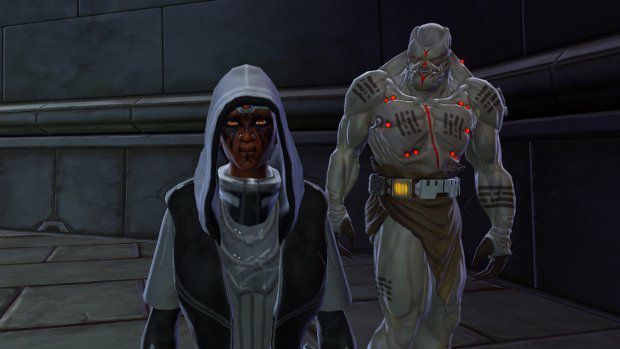 Meet Ketalen, Sith Sorcerer and former slave. She, like the Honey Badger, doesn’t give a sh*t and will sass off to anyone, including her superiors. Her history as a slave in the Empire has given her all the hate and rage she will ever need and taught her many valuable lessons, so that she fits right in among the backstabbing, distrustful Sith.

She is sometimes helpful, and people may thank her for it, but they never seem to realize she isn’t doing it for them. Her motivation in all things is power and advancement. If she ever does a good deed, or helps someone in need, it is only because she gains something in some way (usually extra credits or a little bit of chaos). She will never be treated like a slave again and will crush anyone she has to in order to gain enough influence to not only be free but destroy anyone who looks down on her.

My reasoning for picking Sorcerer was that healing is probably my favorite job in a game, but even that I could say is because my delightful character would rather be at the back of the fight than at the front. Its a lot easier to run away from a fight when you’re closer to the exit.

Her likes include using the force to subjugate and humiliate the weak, putting people in their place, and slaughtering her betters to advance her own career.

Her dislikes include being called a slave and the light side. 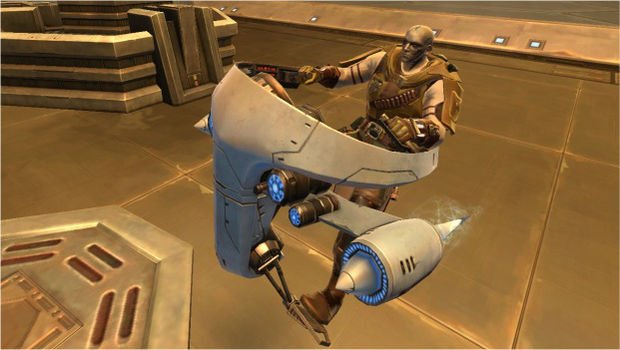 Being both a Rattataki and named after an axe, Hatchet is an abrasive, unfriendly sort. Luckily, neither of those character flaws are particularly problematic in the bounty hunting profession. He might be a murdering psychopath, but he always gets the job done, rarely betraying his employers. Track down the leader of the Revanite cult. Done. Murder Imperial Officers. Done. Blow up many, many buildings. Done. Kidnapping, extortion and executions are all part of his repertoire. This is a gent with a wide range of skills. The only thing that has a chance of stopping him from killing everyone is his companion, Mako, and her whining (I collect influence, deal with it.) But normally it’s slaughter and mayhem all the way.

Choosing Mercenary for Hatchet’s advanced class was a simple choice. Mercenaries get two guns, Powertechs get one. Although it was an aesthetic choice, I’ve come to thoroughly enjoy playing a Mercenary. It’s very satisfying to be able to wipe out mobs and other players before they can even get close to me. I selected the Arsenal tree for its excellent ranged DPS. The core ability for an Arsenal Mercenary is Tracer Missile which applies a debuff, reducing armor by up to 20 percent. My build focuses on keeping enemies at a distance, Tracer Missile and High Velocity Gas Cylinder, which increases armor penetration by 35 percent.

In group content I’m most helpful when spamming my debuff and rapidly taking out trash mobs. Arsenal Mercenaries are generally stationary, so sometimes it can get a bit dull, but effective. I’ve not put much time into PvP, but I tend to end matches with favorable statistics. I’m sure that will change when people realize that the chaps with the glowing sticks aren’t the only things that can kill you. 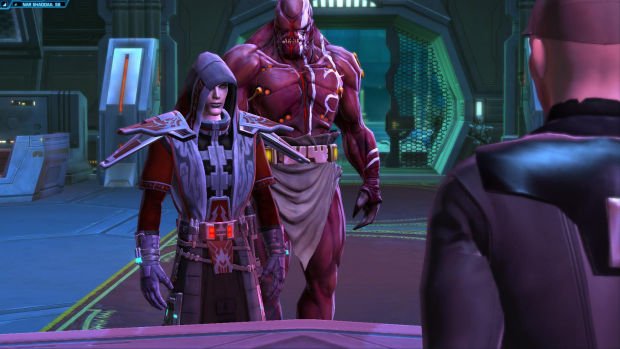 This is Vilify. Arrogant, sadistic, and obsessed with attaining as much power and status as he can claw for himself. Even as a slave, his ego was ridiculous. He knew that his sensitivity to the Force wouldn’t keep him in chains for long, but still he felt the need to hurry the process along — physically maiming several of his cellmates with an unrefined approximation of Force Lightning, simply in the hopes that his captors would be impressed. It was sloppy and messy, but the gamble paid off in spades — he found himself bound for Korriban, and the Sith Academy that he knew he was destined for.

As a Sith Sorcerer, Vilify now enjoys a level of privilege that few achieve, and he abuses it liberally to get what he wants. Torture, murder, and simple rudeness are his tools of the trade, all of which he employs with malevolent glee. He doesn’t value subtlety, preferring to butcher anybody who gets in his way and terrify any who don’t. Lesser humans are beneath him, the Imperial soldiers under his command exist only to be criticized, and enemies are there simply to scream. What started as a quest for knowledge and social advancement is now a lunatic’s campaign, as Vilify has become addicted to the thrill of a life without rules. His intentions were never noble, but even so he has still managed to become a grotesque mockery of his former, already unpleasant self. While he claims alliegance to the Sith, and will even proselytize in its name, his interest in the Dark Side has warped into a far more personal, utterly narcissistic, crusade.

Sorcerers can choose skills to help them become master healers or damage-per-second devastators. Naturally, Vilify has gone with the latter, manipulating the Force to ensure that his enemies carry a death sentence before combat has even started. Then there’s all that pretty, painful lightning.

And does he ever feel bad about the things he’s done? Not really. If his victims were better trained, better prepared, and simply better people, they wouldn’t have been victims. 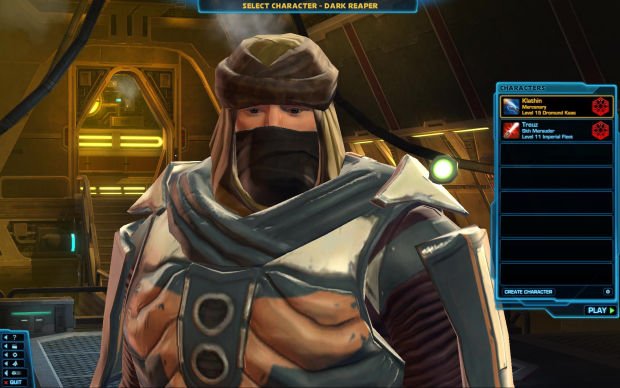 I’ve rolled up three characters so far, but the one I’ve been playing most has been Klathin, my Bounty Hunter Mercenary.

Even though I’m working for the Empire, the thought of a Light Side Bounty Hunter was hilarious to me, and that’s what I decided Klathin would be. I’ve gone out of my way to pick the Light Side option in every conversation I’ve been in, and I’ve essentially become a bounty hunter with some sort of weird, warped, conscience. The result of this conscience is that Klathin manages to solve problems and do jobs while putting forth the absolute minimum effort. It’s been rather interesting/entertaining.

Given that Bounty Hunters murder people for money, the stuff I do to weasel out of murder (and it’s usually an easy way out) has been kind of hilarious. A lot of the time, choosing the Light Side dialogue choice allows my target to fake their own death and escape. In one instance, rather than kill my target, he just gave me a bag with someone else’s head in it, and I used it to convince a Hutt I had completed my mission. Other times, it involves Klathin deciding his employer is evil and turning on them. Sometimes they end up dead, but more often than not I just threaten them and they pay me for doing absolutely no work.

In the rare occasions I have to fight, I’m a walking death machine. I can pretty much stand in one place and shoot rockets and lasers and bombs and massive sprays of fire and take out anything that’s stupid enough to actually challenge me.

I’ve only made it to level 15, but I’m pretty sure I am literally the worst Bounty Hunter in the galaxy. I regularly murder the people who hire me, my targets usually escape, and I just sit back and rake in the credits. I’m not exactly sure how my reputation hasn’t caught up with me yet, but I’m going to ride it out as long as I can. People seem to think I’m doing a good job, so I guess I’ve managed to kill or trick anyone stupid enough to actually pay me to do something. 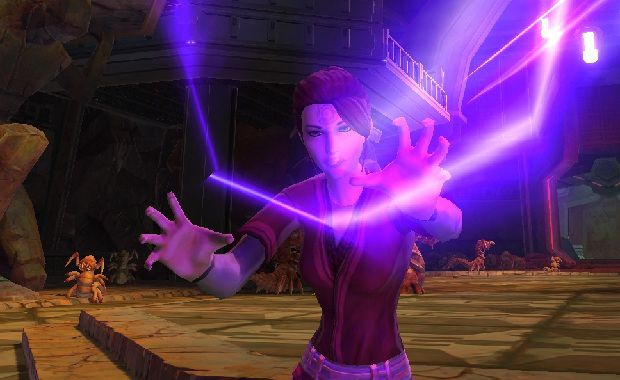 Nali Keteris was, at one time in her life, a gifted padawan under tutelage from the Jedi Academy instructors on Coruscant. Though relatively unimpressive in her skills with a lightsaber, the clarity with which she perceived the Force was profound and well-reputed. She would often attribute this to her willingness to recognize all emotion – good and bad – a personal precept her mentors fervently attempted to dissuade her from following.

The most vocal of these was Jedi Master Bruan Paraja, teacher to Abraxis Mohrry, a male human padawan. Master Paraja saw in Nail a great and unsettled heart, one that yearned for adventure and companionship. He would often overhear his star pupil Abraxis and the restless Nali converse about what lay beyond the bounds of the Academy, among the stars. Master Paraja feared for his student, knowing that attachment and emotion often led students with good intentions to the darkest shadows, sometimes irreversibly so.

In voicing his concerns to the overseeing Council, Master Paraja sealed Nali’s fate and cast her out as a dangerous exile. She was forced off-world the following week. Months later, a nearly feral shade of what was once the promising student Nali was captured and branded as a slave for the Sith Empire. Though she could hardly recall her own name at this point, the news of Coruscant’s sacking was enough to re-awaken her Force prowess. Assuming the worst for her secret love, Abraxis, she flew into an explosive rage; literally. Sparks crackling between her fingertips, Nali slaughtered the crew that had been holding her. Her freedom was short-lived however, as a supervising Sith Lord quelled the young girl’s fury with a demonstrated mastery of the Force Choke technique.

Now, Nali finds herself on the Sith homeworld of Korriban, treated once more as a slave. She remembers only fragments of her past, and though her Sith masters would have her lash out once more, Jedi temperance commands her to restrain such wrath. Still, survival is survival. Out here, no one is Jedi or Sith, good or bad. There are only those who succeed, and those who die. And Nali will not die. Not here. Not now. Not without some degree of retribution. Not without vengeance.