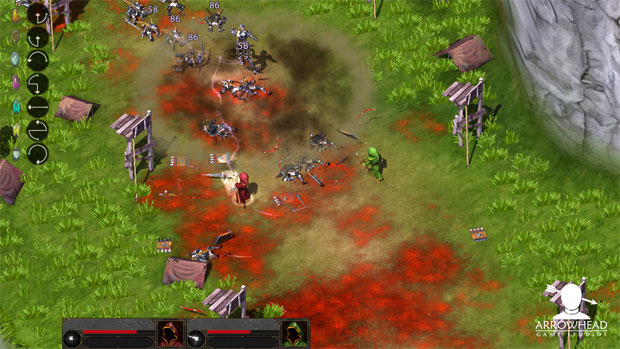 At first glance, it may not look like much more than a typical point-and-click-to-kill-things game. The dev team is looking to bring Magicka to Xbox LIVE Arcade, so I suppose it’s more of a “press buttons and watch things explode into Kibbles ‘n Bits” sort of deal.

There seems to be a bit of self-referential humor going on, at least in the game’s debut trailer — “Become immersed in a generic fantasy world” — although, if The Simpsons or Eat Lead: The Return of Matt Hazard taught us anything, it’s that joking about bad game design while implementing said design is not advisable.

But don’t leave yet; I’m getting to the positives! All of Magicka‘s modes support 4-person cooperative, which seems to be where the true fun lies. The best part? You can totally kill your “teammates” if you so choose. I’m all for competitive on-the-couch co-op, especially when it’s encouraged like it appears to be here.