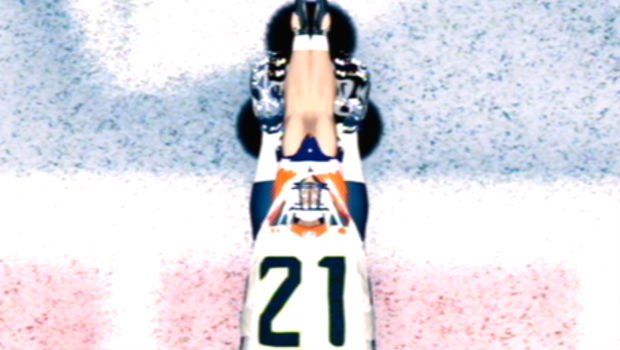 Or when FIFA 13 on 3DS was re-released as FIFA 14 on 3DS. The $40 videogame contained “no updates to gameplay or game modes,” only “updated kits and rosters.” So that’s when you can snark about it being a roster update.

Except that snarking isn’t sufficient, because this is just bullshit. Stop re-releasing the games.

Madden 15 is better than its predecessor, but not on PS3 and Xbox 360. These versions have some of the improvements that you can read about in my Madden 15 review, so it’s not a complete re-release. But a lot of them are missing, including its only saving grace, the new defensive view and player lock mechanics. And everything still looks fuzzy and Jim Nantz’s horrifying, corrugated face is a weird juxtaposition to Phil Simms’ slathered-in-vaseline soft glow.

It also runs horribly. It is slow. I spent lots of time angrily thumbing through Twitter while waiting for games to end, to begin, for the week to advance in franchise. Outside of slow loads, the UI is clunky and even non-responsive. This includes out of game bits, but also the playbook in-game, where sometimes you’d pick a play and the game would freeze for a bit, long enough to leave you wondering if you have to get up and reset the thing (never did, to its slim credit) and often enough that making it part of a drinking game would be hazardous.

I’m mostly sorry I couldn’t have had this up for launch last week and saved some people who read the positive reviews of Madden 15 from buying a junky, janky and inferior version. This is what we get when an exclusivity deal (between EA and the NFL) is in place, thanks to our fatal love of football. EA knows it will still make money and so it does.