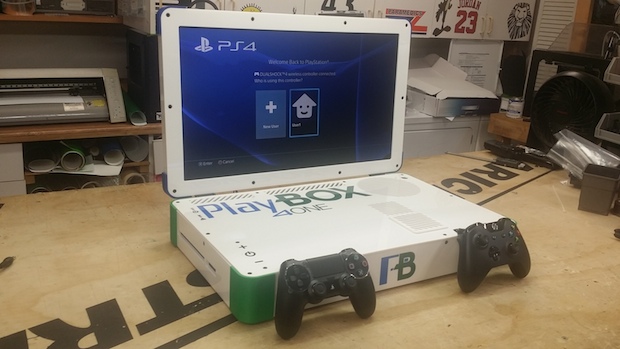 You know, for those enormous laps we all have!

Eddie Zarick, the Doc Brown-esque craftsman behind those cool PS4 and Xbox One laptops, has gone one step beyond: he’s put both current-generation consoles into one big shell.

Apparently, the PS4’s capacitive power button has a few kinks (it doesn’t work 100% of the time), but otherwise, this is exactly what you’d expect: a pretty big laptop that can play just about every console game on the market. Next step is duct-taping a Wii U to this thing, right?

Zarick will make a PlayBox Forty-One for any “seriously interested customer,” so if you’ve got the cash to burn, head on over to Eddie’s website and shoot him an email!

Filed under... #Cooler than the other side of the pillow#Hardware