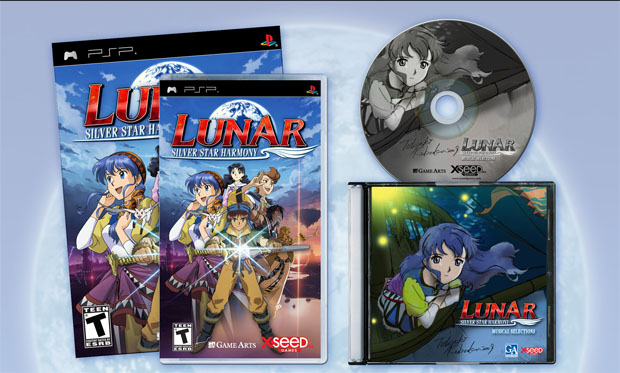 XSEED is busy prepping their upcoming PSP game, Lunar: Silver Star Harmony, for release early next year. They send along news of a Limited Edition version of the game, which will include several goodies that are sure to please long time Lunar series fans. I’m one of those fans.

You’ll want to get out and pre-order this limited edition, which will include a soundtrack CD and a set of 13 exclusive “bromide” collector cards highlighting the girls of Lunar. Remember the bromide collectibles? How cool is that?

Lunar: Silver Star Harmony, with its new localization, new soundtrack, battle system and graphics, will be released in Q1 of 2010, for $29.99. The Limited Edition listed above will be priced at $39.99. I am definitely getting the Limited Editions, which will sit proudly alongside my copies of the Sega CD and PS1 versions I have.

Check out some new screens as well as more images of the Limited Edition in our gallery below.