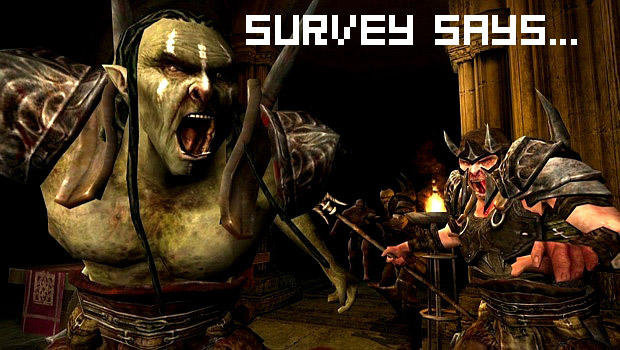 We first told you about a strong rumor pointing to a Lord of the Rings MMO coming to the Xbox 360. Our source was solid. Turbine did not confirm the release, but they didn’t deny anything either.

The sharp eyes of GameDaily discovered an online gaming survey that looks to confirm the existence of a Lord of the Rings Online MMO for the Xbox 360. The Intellisurvey also seems to point to some details on the pricing structure and possible DLC content.

GameDaily says that the survey asked a series of questions about online gaming, including the following:

Assuming that you liked the content and theme of this Lord of the Rings MMO for the Xbox 360, how likely would you be to purchase the game for $59.99, plus pay a monthly subscription of $12.99?

Not to divulge what we’ve heard or who we’ve heard it from, but doesn’t this survey sound a lot like a poll we threw at you in April? We basically asked you the same questions. It looks like the one that started this poll wants to know the same answers we did. The survey even asks what dollar amounts people would be willing to pay for DLC items. Interesting. If you ask me, someone is trying to figure out if you’d rather pay a subscription fee or support a game with DLC purchases.

As for the game itself, you’ll find a proposed game description from the survey after the jump. This survey looks to confirm that the game is coming and also seems to be seeking the pricing structure that more gamers will accept.

Make the move to Middle-earth as you adventure from the Shire to the shadowed walls of Mordor! Fight for the Free People of Middle-earth as you battle against the forces of the Dark Lord, or serve Sauron as you seek to obtain the One Ring! Play as any of 8 races and set out on your own epic adventure within the world created by J.R.R. Tolkien.

Wage war against other players within Middle-earth in epic player vs. player battlegrounds! Earn Destiny Points that can be used to unlock powerful rewards.

Two Epic Stories allow you to serve the Fellowship of the Ring or the Dark Lord Sauron! More than 600 quests will mold you into an unstoppable force for good…or evil. The choice is yours.

Explore hundreds of hours of game play in the largest virtual world ever built on console.

Filed under... #Lord of the Rings#rumors