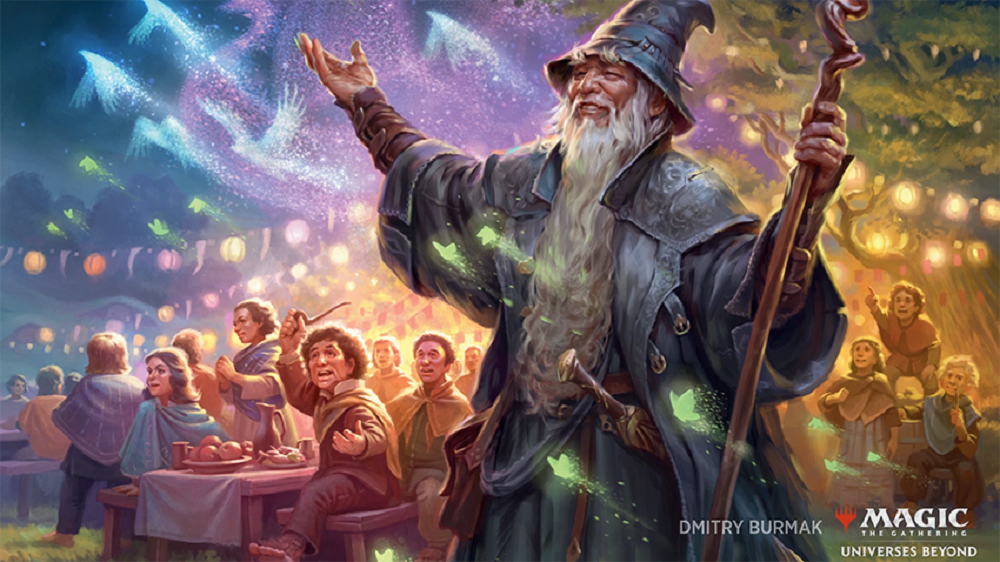 A wizard is never late

We heard about the Lord of the Rings: Tales of Middle-earth set for Magic: The Gathering in passing earlier this year, but now Wizards of the Coast is ready to actually talk about it — and give us our first piece of art!

Naturally it’s Gandalf, hanging out in The Shire near the start of The Fellowship of the Ring. We can see various Hobbits in the background enjoying his firework display, including one that is certainly Bilbo Baggins. The card is called “Gandalf: Friend of the Shire.”

As for who is appearing, “Gollum, and Frodo” are all confirmed, in addition to the obvious reveal of Gandalf. While it will be printed in paper Magic, the Lord of the Rings set has been confirmed for Magic: Arena as well as Magic Online.

Interestingly, the partnership seems to be with Middle-earth Enterprises (MEE), and not the Tolkien estate directly. Meaning, the set will likely stick to everything MEE is entitled to: which includes events covered in Fellowship, Two Towers, Return of the King, and the appendices, similar to how the Jackson films played out. Still, I’m holding out for at least one Valar planeswalker.

Here’s the rub on how this set actually interacts with Magic at large, straight from the Wizards of the Coast blog:

“Like all Universes Beyond product, the set will not be legal in Standard, but Modern (and Historic) legality provides the greatest opportunity for the most people to experience this beloved world while still holding Standard as its own space. While the set isn’t focused on Modern like a Modern Horizons set might be, we wanted to give as many players the opportunity to play with these cards and enjoy them.”

In short, it’s not standard legal, meaning you won’t be seeing it in some elements of competitive play. However, it will be used in modern and historic formats, which includes Magic: Arena with the latter.

You can find the entire 2021 Magic showcase below, with the Lord of the Rings talk starting at roughly 39:00 in.