There’s a few caveats though

I managed to pick up a Shovel Knight amiibo yesterday for the US launch, and I couldn’t resist giving it a go immediately on Wii U.

Despite the fact that I’ve completed the campaign roughly 10 times since its launch (not counting the Plague Knight add-on), I was surprised to find that I fell in love with it all over again. 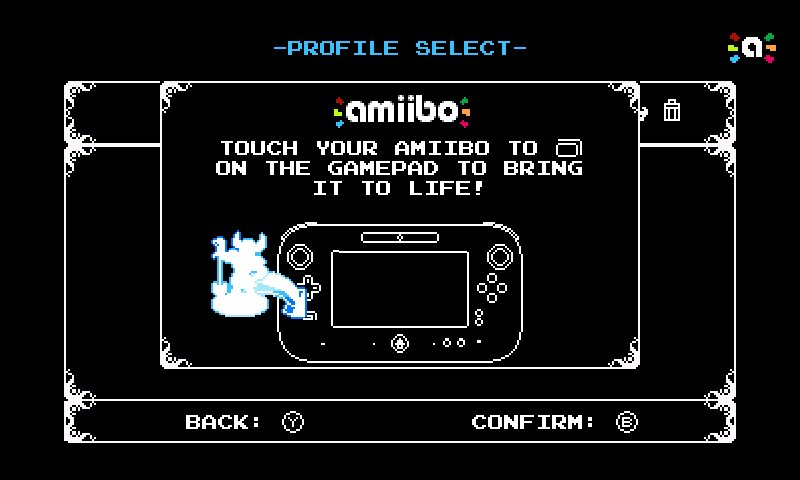 The primary function of the amiibo, as you may have heard, is co-op, but there’s so much more to it than that. Tapping a figure to your GamePad base will in fact open up the “Custom Knight” character, which looks like the main hero at first glance, but is actually so much more. Instead of gaining powers by way of Relics and Meal Tickets, this hero levels-up as you play, and saves its data to the figure itself. Skills are granted randomly, and include both Shovel and Plague Knight powers, as well as a few extras. The extras are hefty too, as each Custom can equip a Relic (as well as swap between them with L/R like Mega Man X), a charge move, special effect (like a fire trail), gesture, color, and costume. It’s literally like playing as a brand new character.

As for co-op, it works very well. Two players share the screen, and if one hits a transition phase, the other will teleport to their location and begin the next screen. The game is designed so that most bonus areas and such are one screen, so you don’t need be jumping on top of each other constantly. If someone dies, they can revive at any given time by taking half of the surviving player’s health. In terms of jumping, players can actually boost off of each other vertically with a downwards thrust, and you can even enhance that boost by having the lower player leap in the air. It reminds me of the Chip ‘n Dale Rescue Rangers NES game in all the best ways. Oh, and any supported controller can be used for either player (nice), and 10 challenges are added to the game as a result of the amiibo, including five that are specific to co-op play.

So what are the aforementioned caveats? Well, to play with two Custom Knights, you’ll need two amiibo. On paper it kind of makes sense (storing the information in separate figures, or as a form of DRM) but on another, it really doesn’t (why can’t the Wii U just store a local file?). Secondly, the Plague Knight campaign is not supported in any form, full stop — so don’t get too excited at the prospect of Custom and Plague joining forces. Though, it stands to reason that if the Shovel Knight amiibo is a smashing success, they could make more to suit the character roster. And I really hope they do, because it would make the game that much better.

As far as $13 DLC goes, the Shovel Knight amiibo is pretty impressive. It not only adds co-op to the affair but it also re-ignited my interest in the single-player campaign with the Custom Knight. The concept of granting one individual character a level-up system is pretty unique, and since it rounds out the total roster to three, it adds even more content to this already packed game. At this point the Wii U has the definitive version of Shovel Knight.