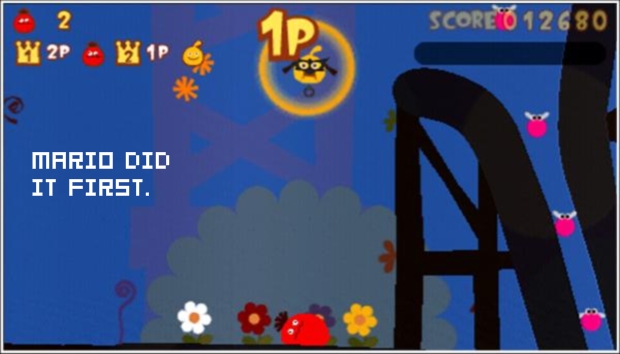 LocoRoco Midnight Carnival is coming out in time for Halloween. This means you can start dressing up your bouncy, rolly, friends in all new get ups while playing through 16 brand new stages. You don’t even need a UMD because it’s all downloadable via the PSN store for just $14.99. The game will also feature some brand new competitive and co-op modes, which are being revealed next week, and a new “BOING” mechanism that Playstion.blog claims adds even more fun and challenge to the game.

An interesting little tidbit about the game actually stems from one of the new articles of equipment coming in the game. It’s called the “Savior Mask,” and it sounds like it functions a lot like New Super Mario Bros. Wii‘s Super Guide, expect not quite as awesome. When the mask is equipped you’ll be able to hold onto “your friend” and bypass the area. Has Nintendo started a new trend here, and if so do we like it? I know that my fiancee quits games when she gets too frustrated so features like this are a godsend to me.