When I first booted up the beta build of Let’s Build a Zoo, I had humble ambitions. Safariland, as I had named my establishment, would be a family-friendly park. Our first enclosure held tiny little rabbits, graciously offered to Safariland by another zoo in Australia.

And then I got the opportunity to buy a hippooose on the black market. Things kind of spiraled from there.

Let’s Build a Zoo is an upcoming zoo management game from Springloaded and No More Robots, and on its face, it’s a pretty cute little tycoon game. There is a darker side though, and if you choose to, you can forgo lofty ideals of a pristine animal sanctuary and dive deep into the seedier side of zoo management.

As Safariland grew, so did my costs. Researchers, caretakers, and janitors all cost money—even my sources of cash, like my hot dog and balloon stands, required staff members to operate, and those are all salaries I had to pay. A soda machine was a stopgap; I needed income, and that meant ticket sales. 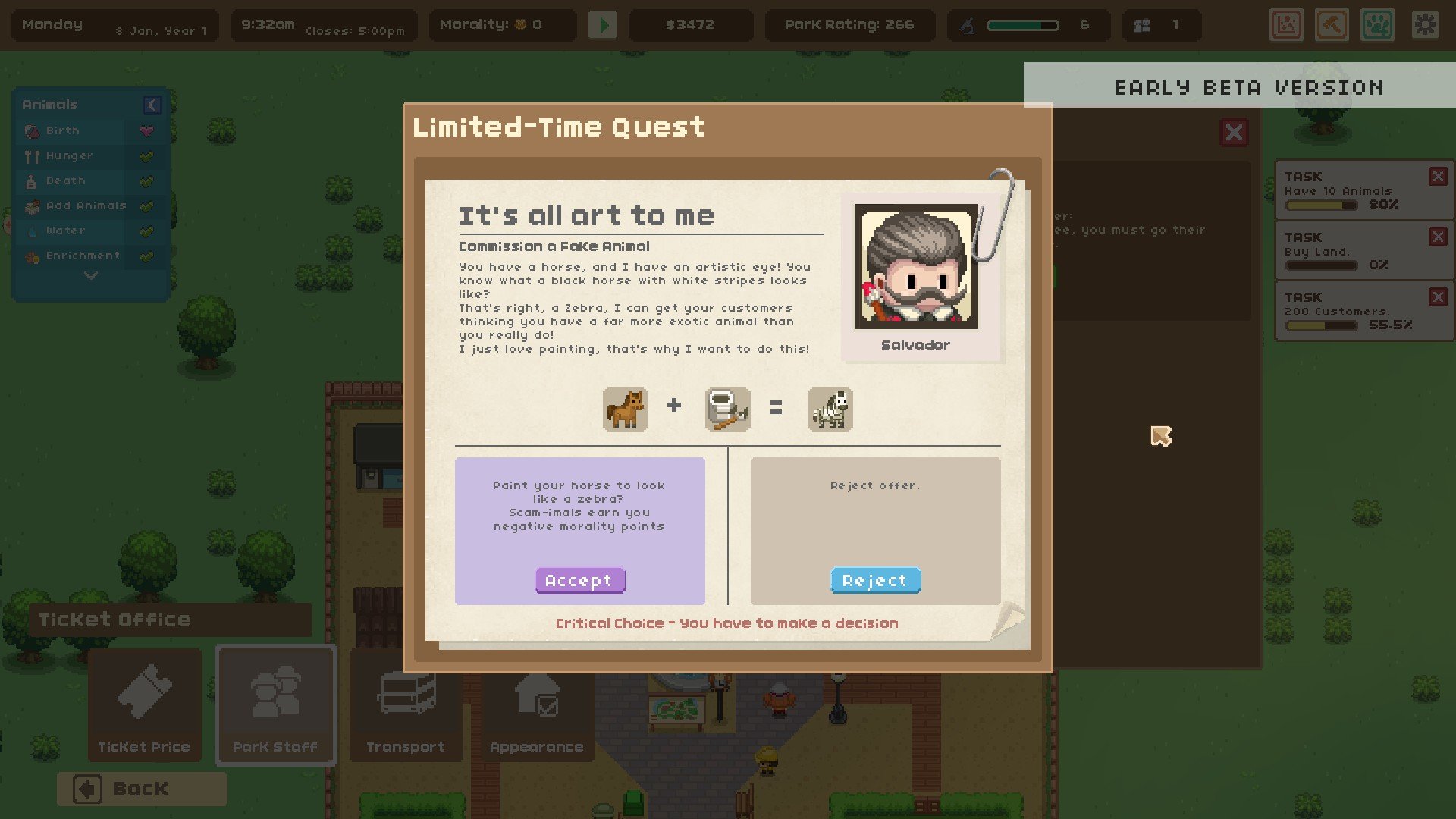 To draw people in, I needed the rare and exotic, not just rabbits. At one point, an artist made me an offer: he would paint my horses, for free, to look like zebras. They wouldn’t actually be zebras, and it was highly unethical, but it was tempting. I decided no, I could meet my demands with one simple addition: the hippooose.

One of the big draws of Let’s Build a Zoo is its gene splicing. Once you’ve built a CRISPR station, you can mix any DNA strands you’d like to create new species of animal. The hippooose is a combination: one part hippo, one part goose. I’m not so sure mixing the mind of a goose with the body and destructive capabilities of a hippo was a good idea, but the people loved it.

Soon, I was expanding, and learning a lesson in the process: tons of zoos had normal animals, but I could have rare animals, the kind no one’s ever seen. By demo’s end I only managed to forge one more gene-spliced attraction—a half-snake, half-rabbit hybrid—but I was already seeing the appeal. In other tabs there were black market options, and the ability to buy or sell my creations to help fund my ventures. Let’s Build a Zoo‘s trailer implies even darker machinations, but aside from some light gene-splicing that would make Jurassic Park‘s John Hammond bust out his wallet, I kept things mostly above board.

Even playing a stuffy, ethical zoo manager was really engaging, though. The initial appeal of a darker side to zoo management is exciting, but what kept me fully absorbed was just how easy it was to map out my business. New terrain and pathing is easy to plot out, buildings can freely move, and enclosures can swap animals at any point.

Most of the important work is ensuring animals are happy in their enclosures (at least, if you want them to be happy). Keeping them engaged with toys and trampolines is crucial, as is ensuring there are enough water troughs. Attendees might enjoy seeing a beautiful fountain or a fun stand-up to take pictures with, but the animals are why they’re really there.

In that way, I would’ve liked a little more of a guiding hand towards some of the deeper mechanics. Let’s Build a Zoo is way, way deeper of a sim than you might think just glancing at screenshots. Enclosures have a variety of objects that can affect both the animal’s well-being and the appeal of the enclosure to park goers; employees have salaries that have to be managed, and recruiting new workers means posting a job and searching for candidates; supplies need to be watched, and corners can be cut if you need a little boost to make payments. 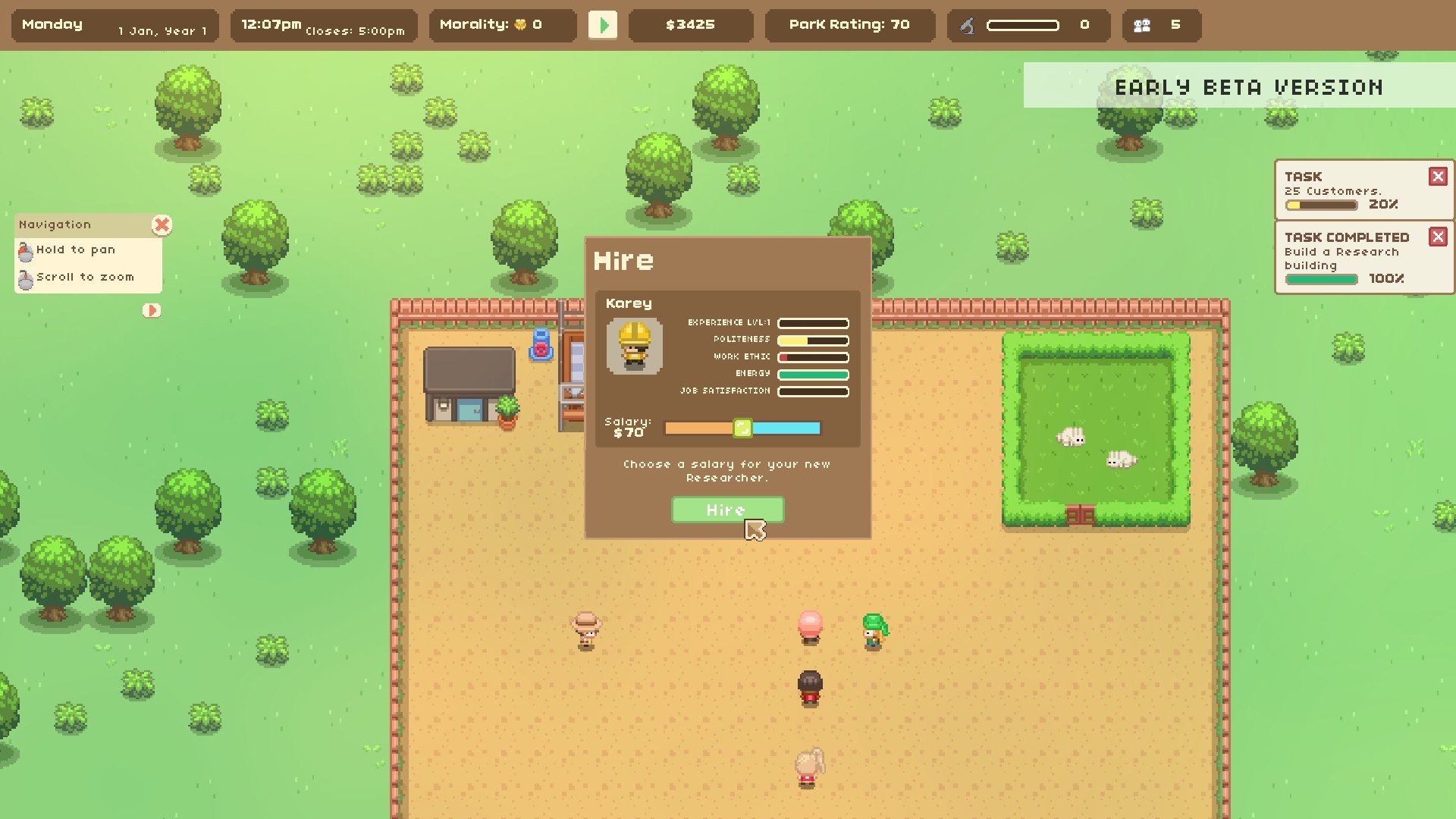 To that end, a little more guidance in navigating menus, or even understanding why certain advancements or options were being gated, would help. It took me longer than I’d like to admit to figure out how the water management worked, and even after playing through the beta period, I had some trouble relocating where certain options were or figuring out why I couldn’t add a second researcher yet.

Yet the best testament to how much Let’s Build a Zoo pulls the player in is how much I want to keep playing. It has that crucial hook of playing just one more day, just expanding a little bit more, always keeping a new goal or some new addition a few steps ahead of you. It took me very little time to start working with the tools Let’s Build a Zoo provides, and within minutes I was imagining what I could do once I filled out the research grid and developed new tools for sprucing up my park. 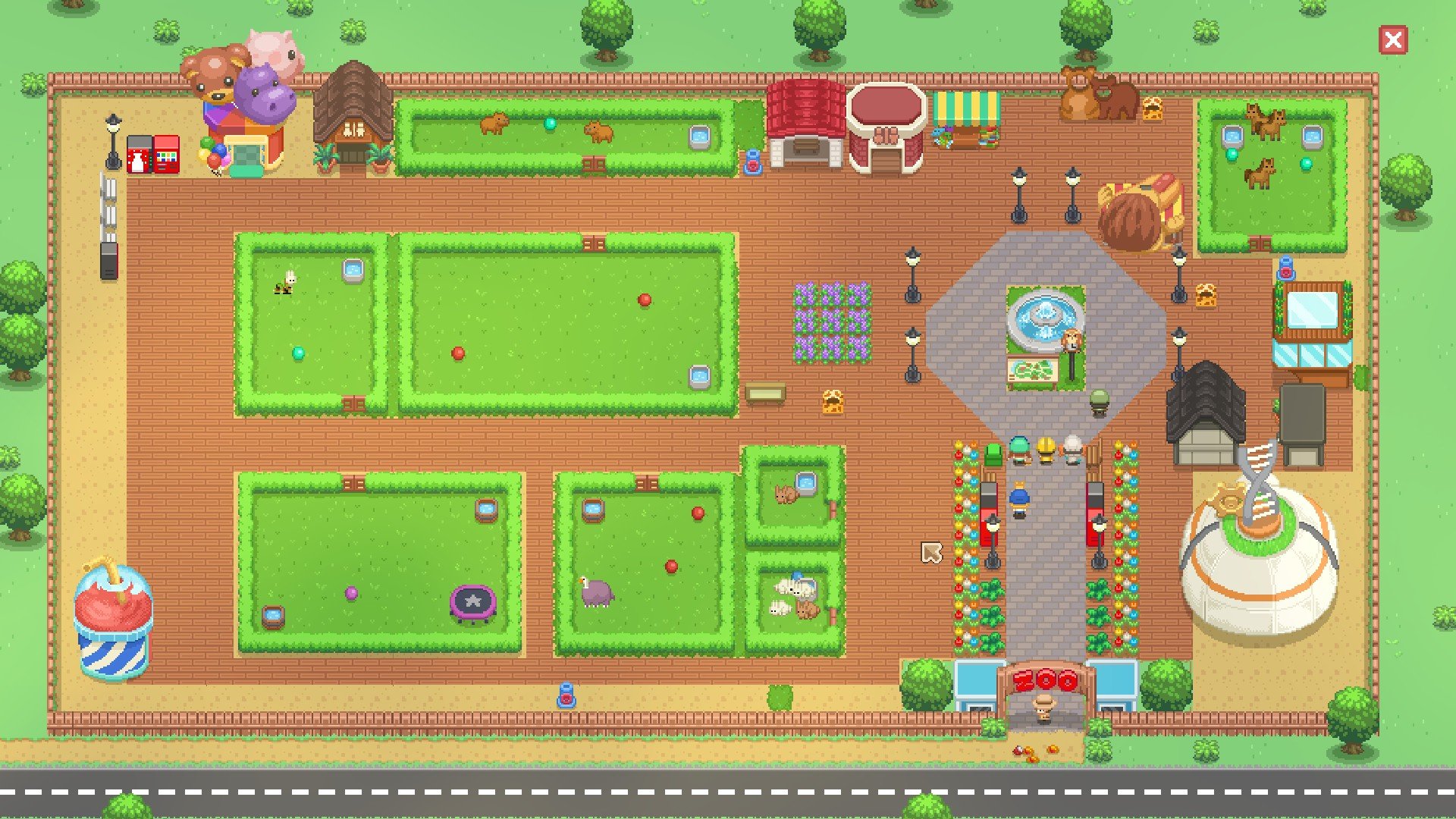 And that’s not even diving into some of the other things that are unavailable in the beta but still visible. It seems like there’s going to be a frankly incredible number of avenues to go down in managing a zoo, when all is said and done. How that gets done is really up to you; nice and neat, or shady and extremely profitable?

All I know is, once the full game is out, I’m making more hippoooses. Let’s Build a Zoo is slated to launch sometime in the future on PC.