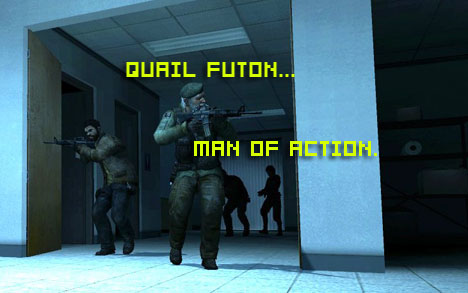 Having formulated plans for almost every eventuality once the dead rise, or the virus breaks out, or whatever flavor of zombie apocalypse you prefer, the brief time I had my hands on Left 4 Dead at PAX resulted in a horrifying revelation. If the zombie apocalypse ever actually happens and I’m forced to fend for myself with whatever I’m lucky enough to have at hand I am well and truly screwed.

The high population center scenarios of Left 4 Dead aren’t the kind of thing for which zombiphiles usually prepare. Realizing that to stay in a place brimming with creatures that want to rend you limb from limb is likely to result in the five and ten minute strolls my teammates and I took before being clawed to death while our screams mingled with the animal shrieks of zombies at a feast.

And unless you’re particularly skilled with a controller or keyboard all paths in Left 4 Dead seemingly lead to just such a scenario. I am not particularly skilled with either. But in spite of that fact I was able to gun down a hulking monstrosity as it barreled toward me through an abandoned subway train. Five seconds later I was ripped to shreds and it was all I’d ever hoped it could be and then some.

However for someone such as myself, the type that tends to die early and often, coop shooters aren’t the kind of game likely to provide me with a lengthy, engaging experience. But in spite of biting the dust frequently prior to my Survivor peers, the ability to ride along with someone else if you aren’t revived in time, and even move your camera perspective independently of whomever you’re tracking, kept my fingers twitching the camera around long after I’d died.

For hours after the brief time at Valve’s booth playing Left 4 Dead its effects lingered; a sentiment echoed by those that also got to spend some time with the game. Naturally, being shoved to the ground by a horde of decaying nightmare-people, nearly blind and firing wildly into the hazy shapes you hope are zombies and not allies tends to stick with you. But in the era of shooter saturation, when we move from worlds populated only by creatures that want to kill us, real reactions are in limited supply. As the genuine shrieks emanating from Valve’s booth go to show, Left 4 Dead is going to be wonderfully horrifying.