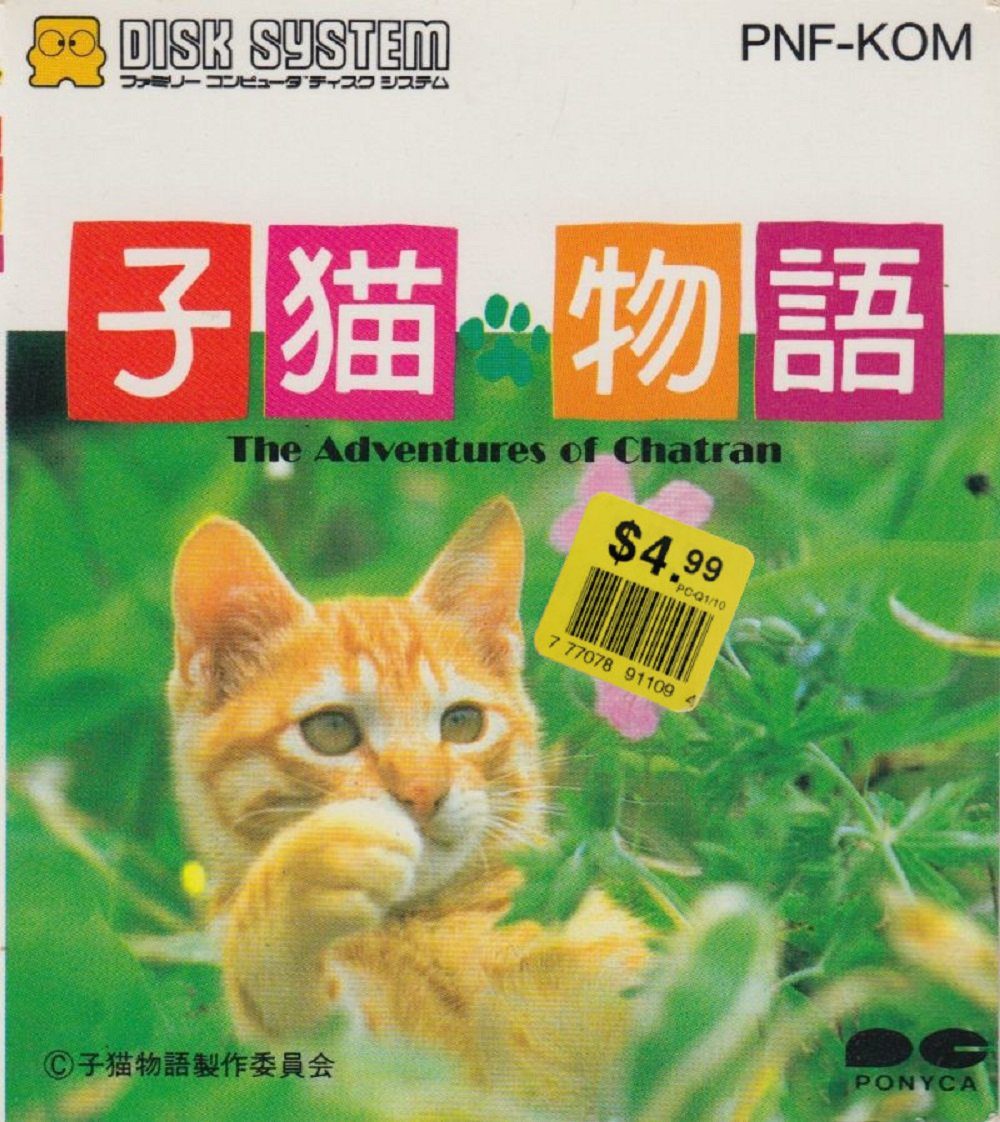 Try not to hate kittens after playing this kusoge

Do you remember the film The Adventures of Milo and Otis? I don’t. It was based on a 1986 Japanese film called Koneko Monogatari. It’s not bad, I guess, if you think you can trust critics. It’s about a kitten getting lost in the wild and a pug puppy that chases after him. Both have misadventures in their efforts to not die. Sort of like Homeward Bound with better public transportation and a vending machine on every corner.

In the wake of Super Mario Bros., Koneko Monogatari was adapted into a game for the Famicom Disk System. Let’s be fair here, it was 1986. Chernobyl exploded, Microsoft went public, and developers were still struggling to figure out how to make console games that weren’t just inferior ports of successful arcade titles. There were definitely a good few 1986 releases, but Koneko Monogatari isn’t one of them.

Upon starting up Koneko Monogatari, you’ll realize two things: the graphics are cute, though not very detailed, and your ears are bleeding. That’s right! The game has you playing as a pudgy, wide-eyed kitty that gallops through fields of green. A sun welcomes you from one corner of the screen, and flowers bloom in the background. Little mice in their underwear are prepared to kill you if you get in their personal space, and trees react to you jumping on them by dropping apples.

If you’re wondering about the blood, that’s because the soundtrack is the kind that you can hear with your teeth. While I would deign to call it music, it is so uncomfortably high-pitched and abrasive that it forcibly polishes your ear canal. What’s really upsetting is that I refused to mute the game, in case it started playing a new song. Because when you drink from an abattoir’s mop bucket, you first have to take in its full bouquet; that’s part of the experience.

Again, let’s be fair. It was 1986. Top Gun came out, the female orgasm was discovered for the first time in the wild, and human hearing had only just developed. We didn’t know how to make good sounds yet.

The goal of Koneko Monogatari is to get from the left side of the world to the right side. Despite being a game that seems targeted at children, this is easier said than done. In as early as the second level, you’re forced to perform jumps over bottomless pits stretched so wide you need pixel-perfect timing to make it over successfully. Every enemy can kill you with a mere touch, and the only way you can defend yourself is by dropping an egg on them. This is stupid for two reasons: the first is that it’s an egg, and the second is that if you’re over top of an enemy, you’ve already cleared them, so why not just complete your jump and keep going on your way. Killing them just seems spiteful.

The eggs only really make sense when you fight the bosses, but also, not really. At the end of some levels (and in the midst of later ones), the exit is blocked by a bear, and you win by jumping on this bear and dropping eggs. This gradually drives the bear into the ground, deeper and deeper, until you can walk past it. Drive the bear into the ground. Like a stake. With eggs. Was that in the movie?

Sometimes the eggs have letters on them, and if you collect enough to spell “HELP,” you’ll summon Otis (Poosky in the Japanese version). The idea is that you maybe get behind Otis and he takes out enemies for you, but whatever you do, don’t touch that pug. Doing so will kill you instantly because apparently, friendship is just as lethal as bears.

It’s unfortunate because Koneko Monogatari is otherwise cute. Although the gameplay is basic and the controls suck on a corndog, it does have a habit of throwing new and interesting mechanics at you to apologize. There are things like hills and different colored bears. Also, you sometimes get to ride a box of water while happy clouds shed their deadly tears down upon you.

The game progresses through the months of the year, with a level for night and day on each month. If you do the math that’s… uh… 24 levels, which kind of elicits a dry heave when you think about it. This amounts to maybe two hours of playtime, which for a normal game might sound reasonable, but for one that is constantly flushing your ears out with Drano, it’s an eternity.

You don’t have to do it all in one sitting, but Koneko Monogatari really wants you to. Like many Famicom Disk System games, you can save, but you actually have to know a code to do so. On the game over screen, you have to press B+A+Up+Start to save. Then, when you’re starting a new game, you press B+A+Down+Start. Intuitive, isn’t it? Especially considering it’s a feature and usually, those aren’t unlocked with super-secret cheat codes.

It at least ends. After planting a nice field of bears and avoiding constant death, there is an end screen. Then you can put the game back in its case, write your article on it, and cry beneath a cold shower.

I tried to find an example of the soundtrack on YouTube, but, if you can believe it, no one seems to have gone to the effort of uploading it. Maybe you’ll have better luck, but I dug in there trying to share the pain. You can watch a playthrough if you don’t trust me, but maybe just take my word for it. I’m only trying to help.

What is really unfortunate is that this game seems like it’s aimed at children and features a cute kitten on the cover. It was on the Famicom Disk System, so it probably wasn’t expensive. Some little boy or girl got Koneko Monogatari as a gift and learned to hate video games at a young age. We can even go a step farther and theorize that, by discouraging a hopeful youth, they drove them away from a potentially illustrious career as a video game columnist. Heavens!

It would be nice if the game underneath all that caterwauling was any good, but it unfortunately plays like how you’d expect a licensed game from the ‘80s would. It’s maybe not as painful as slamming your open palm down on a desktop covered in thumbtacks, but you’ll still be feeling a sting of agony by level three. To be fair, this was 1986. One kilogram hailstones killed 92 in Bangladesh, L. Ron Hubbard died, and fun was still criminalized in 33 states.