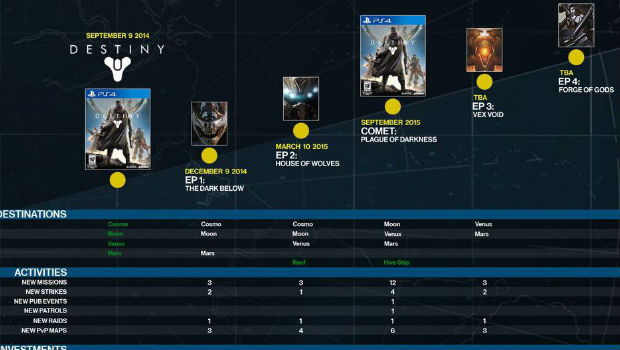 [Update: YouTuber LittleBigOkey has crafted a high-res image of the leak. See it here.]

A new leak has been revealed that may shed some light on what’s in store for Destiny in 2015. So far we have the Dark Below expansion that came out in December and House of Wolves coming in March, but that’s all we know. The leak shows that a “massive” expansion might be coming in September 2015 called “Comet: Plague of Darkness.” It’s allegedly going to be marketed on a disc because of how large it is — three new subclasses are rumored.

After that, there will be two more DLC packs — one of them will deal with the Vex (again) and the other may be Cabal related. “Comet” is apparently “Destiny 1.5,” and if the schedule is to be believed, there will be no Destiny 2 in 2015, since the last leaked expansion will hit in December. Finally, a “GOTY-like” edition is planned after Comet, which would include everything.

If Bungie can make incremental free update improvements along the way, Destiny may be worth picking up down the line.

All Destiny DLC [Bungie.net via FWC]