League of Legends, the fantastic competitive online game brought to you by Riot Games, has been going through a lot of changes over the past couple of months since the last time we posted about the game here on Destructoid.

New modes have dropped, as well as characters, items, runes, and balancing changes. That’s not all, either — there are some plans for the immediate future of the game, beyond just the biggest purse in eSports history. Let’s take a look at what has happened, what is going on now, and what’s on the horizon. 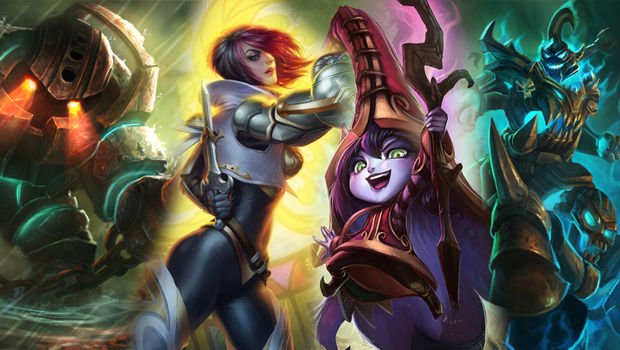 Four new champions have been added since the beginning of February: Nautilus “The Titan of the Depths,” Fiora “The Grand Duelist,” Lulu “The Fae Sorceress,” and Hecarim “The Shadow of War.” Nautilus is a massive and lumbering tank from below the sea with a massive anchor for grabbing opponents and dragging them to him. Fiora is a speedy fencer, who relies mainly on hit and run tactics. Hecarim is fast as hell, and appears so far to work very well as either a surprise ganker, or a split pusher, gaining damage bonuses from being able to move faster. Lulu … is adorable as all can be, and is pure awesome as a result. Oh, she’s also a great support, and can do well as a ranged physical attacker.

There is also a new mode, as well as improvements to the old ones. Spectator Mode made its official full debut last week, allowing not just custom game viewing, but also watching in on friends playing, and featured matches. It comes complete with a custom UI to show both sides of the match, as well as having an automated camera director to lead you around the action. There is currently no chat system when spectating, however, and no way to see other spectators of the same match.

The colorblind mode is seeing improvements abound, with more effects and items adhering to the new color schemes in it. The general UI for the game also got improved, with a new and easier-to-read text added, as well as better looking popup notifications during the match. The co-op vs. AI mode is consistently seeing small improvements to the AI behavior in addition to there being AI for more and more champions. It feels now like the intermediate bots actually have a semblance of some of the players that you would find in PvP matches. They may not feel like the best ones, but certainly it is a long step from where they were in the past.

The future of the League also seems highly promising. Last Thursday, Marc “Tryndamere” Merrill, founder of Riot Games, held an “Ask me Anything” event over Reddit, inviting the community to, well, ask him anything. While Tryndamere didn’t let anything big slip out (unlike when Dominion leaked over Twitter), but there were a few good bits of info.

Merrill stated that player behavior is one of the initiatives of the company, and felt that Riot does “have an awesome opportunity to create the most ‘sportsman like’ online game community in the world.” He even admitted a team within the company dedicated just to player behavior. Some other smaller topics were answered, such as the reasoning behind the levels of their cash pricing, development priorities, as well as addressing the topic of potential future endeavors for the company.

There were a few especially interesting tidbits and disappointments, though. Disappointing was any lack of word on the rumored “Supremacy” project, found through a host of newly registered web domains by Riot. The “Stealth Remake” was discussed, and it was stated that they’ve been hard at work on it, but none of their solutions have been on par with the level of quality they want to offer the community. Basically, those stealth champions become too annoying for their enemies, or are too weak to be viable, and neither situation is good.

Most interesting in my opinion, and most sweet, was a discussion about the “twisted fate” between League champions Ashe and Tryndamere (named after Merrill himself). Ashe was one of the first characters made for the game, and according to the lore, she and Tryndamere married to unite the lands of the north. Merrill stated that it was purely of coincidence that this mirrored himself and his wife, named Ashley. It was a really cute and sweet factoid to hear about.

Merrill also briefly discussed plans for the third season of League of Legends, stating that they want to take League past being just the best eSport in the world, and change the worldwide perception of eSports as a whole.

From the looks of it, Riot is well on its way with League of Legends alone. In the immediate future, we have the slightly delayed release of Varus “The Arrow of Retribution,” a champion made with collaboration from Gabe and Tycho of Penny Arcade. Beyond that, a new issue of the in-game lore based “Journal of Justice” has appeared, hinting at a shaky alliance between two in game nations, and dirty shadow politics from the Institute of War, the group running the League.

What big game-related announcement it will lead to is unknown, but considering how much is mentioned of the area that the Dominion map is located in, I’d wager that it might be tied to the announcement of Ranked Dominion matches.

Sticking to what else is known about League‘s future brings us to the upcoming season two championship. It will span all over the world, starting in China, wrapping back around to Korea, with the finals in California, and visiting many big-name conventions including PAX Prime.

Speaking of PAX, it’s also been hinted that something else related to League of Legends will be happening or announced at the convention. Supposedly, there will be opportunities for people who haven’t gotten passes yet to participate as well.

Even on the surface, Riot Games appears more dedicated to the game that they have created than many other companies of that size and success. The features they walk out with always seem to improve, and consistent tweaks and tuning always show a sign of caring and consistent love of their craft. The future holds the lofty ideals and promises that have been made, and only time will tell if all that has been said will be lived up to.