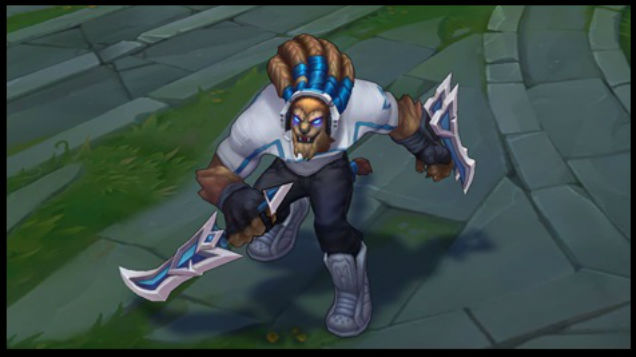 $1 million wasn’t enough of a prize? Fine then, have these

Picture the scene if you will. You’re a member of Korean League of Legends team Samsung Galaxy White. You’ve just come first in the 2014 League of Legends World Championships. You’ve walked away with $1 million in prize money but you just don’t feel that sense of satisfaction you had hoped you would feel. If only you could also wear your team uniform in the game, then you’d truly feel like a winner, right?

As a special reward for their World Championships win, Riot is creating a special set of purchasable character skins that will allow people across the world to dress up like Samsung Galaxy White, through which you will live on FOREVER!

While most of these skins are just adding a jacket to a character, I think Riot may have gone the extra mile with Twitch’s Imp, whose Twitch Recall animation sees him drop to the ground and roll around in glee for a few seconds before returning to base, a reference to a now infamous interview in which the player dropped to the floor to roll around in a huge field of beautifully kept grass.