Antoine Routon grinned. “We have people knocking down our door saying ‘Can you do our game too?'” Routon’s the lead programmer at Square Enix Montreal — the publisher’s studio that’s dedicated to mobile titles. Square Enix has a newfound affinity for trusting this Montreal team to adapt its biggest properties in a way that makes sense for phones and tablets.

None may be more noteworthy than in the case of Lara Croft because Square Enix has two very distinct visions for her. The first, Tomb Raider, is the gritty survivalist Lara which is most well-known in the triple-A big budget space. The other, Lara Croft, is what Tomb Raider of yesteryear was defined by: exploration-based treasure hunting. 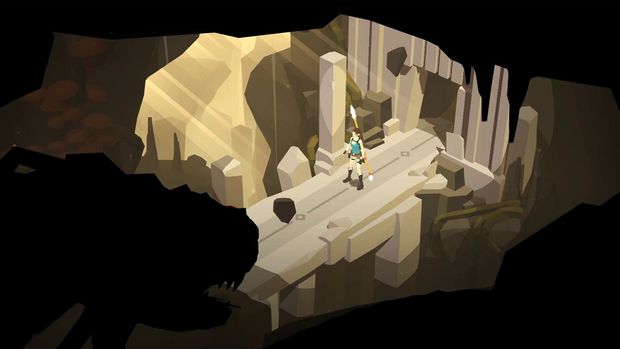 Lara Croft GO fits soundly into that latter category by more than just name alone. Despite being a mobile title, it nicely captures the spirit of the very first Tomb Raider games. Donning her classic outfit, Lara works through level after level in search of an artifact. Puzzle-solving and exploration are earmarks, just as they had been all those years ago.

However, the mobile format is what makes GO distinct. Rather than continuous action, this game is turn-based which places a greater emphasis on thinking before moving. A rudimentary example might be a pair of snakes that are facing opposite directions. You always have to attack from the side or back, lest they strike and kill you first. There’s only one path that allows for the correct order of operations; the others just leave you dead.

But, even when Lara Croft GO deals out frustration, it doesn’t negate progress. This is the mobile crowd, after all — a group that might not have the patience to have its time wasted. Checkpoints come frequently and everything is ever-so bite-sized.

On a micro-level, the scale of each section is obviously intentional. Routon says that the studio knows who it’s developing for. Despite Lara Croft GO allowing for minimal time investments, Square Enix Montreal is seeing a more encouraging trend. “People intend to play for five minutes, and they end up playing for an hour or more,” Routon comments. “We tell playtesters they can leave, but they say they want to finish this puzzle first. I guess that’s not a bad thing.”

It really doesn’t come as a surprise that people don’t want to put Lara Croft GO down. It elegantly encapsulates what makes Tomb Raider work, and boils it down to its purest form. Swipe, swipe, swiping on the screen is so simple, yet it doesn’t feel cheap to lead Lara on an adventure in this fashion. Helping production values are the strong aesthetic and the narrative told only through gameplay details.

Although it’s in the mobile market, Square Enix Montreal prices its titles more traditionally. GO will be available on August 27, but the cost is unknown right now (Hitman Go released at $4.99). Once invested, this game is fully playable at any speed; there are no energy meters to temper progress. Routon confirmed that there will be microtransactions of some sort, but their nature will be puzzle solutions for those who are struggling.

In a wasteland of freemium games, this price model is commendable. More commendable, however, is the way that Square Enix Montreal boldly gets back to the roots of Tomb Raider. Series veterans will rediscover a Lara Croft that they know and love in a format that’s undiscovered to them. Fitting, seeing as Tomb Raider should be all about discovery.