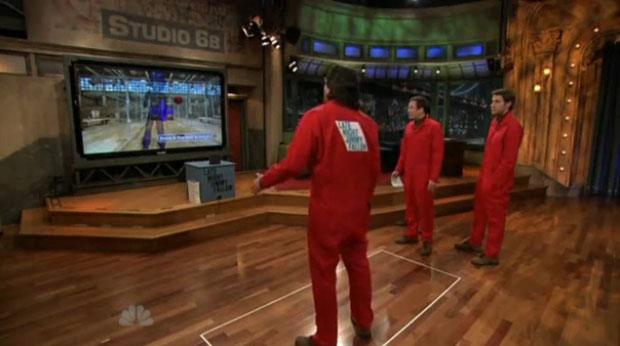 Apparently, Jimmy Fallon is serious about this whole videogame thing. He is, as far as I know, the first late night host to feature multiple games-industry personalities. On last night’s Late Night with Jimmy Fallon, he demonstrated his dedication to games by inviting on Microsoft’s Kudo Tsunoda to demonstrate Project Natal.

Much of what’s demonstrated is what we saw at the press conference, like the “Breakout with your body” demo. Fallon and company even get into the action, hopping right in and knocking balls around with relative ease. Of particularly hilarious note is the dejected pose one of Fallon’s cohorts makes when he misses a ball, the on-screen Avatar easily picking up on the actions.

Tsunoda also busts about a version of Burnout Paradise that Microsoft re-engineered to work with Natal. It appears to work, for sure, but I question as to whether or not controlling a racing game without anything your hand (a wheel for instance) could feel… right. Regardless, the technology is pretty incredible, and appears to work as advertised.

The question is – when will this “new future of videogames” begin? Microsoft isn’t committing to a time frame, and a reliable source told us “this holiday.” Another source told us “holiday 2010.” So I guess what we’re trying to say is: we have no idea. But we kind of want it.