Please, my wallet can only suffer so much…

Hot on the heels of its King of Fighters Mai Shiranui reveal, the merch-makers at Kotobukiya have released images of its upcoming Darkstalkers figurines, namely the sultry succubus Morrigan Aensland, who is now available for pre-order.

Joining Kotobukiya’s mammoth Bishoujo line, Morrigan was basically forever destined to join her fighting game and comic book gal pals — frankly, it’s surprising it has taken this long. Like all figurines in the Bishoujo lineup, Morrigan stands roughly nine inches in height and is posed in vertebrae-breaking form, as rendered by artist Shunya Yamashita. Morrigan’s graduated hair looks lovely, and her textured wings are a delightful touch. Honestly, I think her teasing facial expression is a tad on the goofy side. 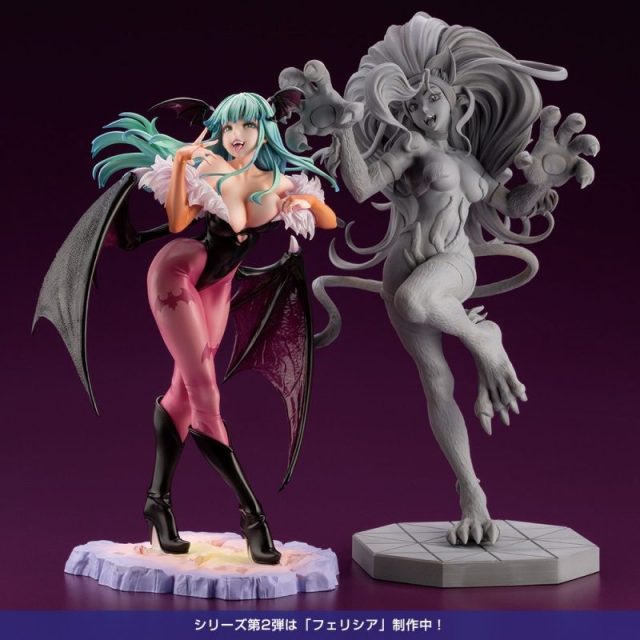 In addition to Morrigan’s reveal, Kotobukiya also released images of an unpainted prototype for her feline friend Felicia, posed in typically playful form. One of the Bishoujo line’s best design features lies in its dynamic posing and hair design, and characters like Darkstalkers‘ comical cat lady are custom-designed to be immortalized in figurine form.

Kotobukiya Morrigan is available to pre-order now from numerous outlets, but I expect her to be relatively easy to pick up from your local comic store — Kotobukiya’s figurines tend to be widely available for the first few months of release. Morrigan is scheduled to ship in the spring, with Felicia to follow later in 2022.