And it wasn’t even close

If you were to take booths’ popularity at PAX South and plot them on a heat map, most of the obvious candidates would stick out. Twitch would be red hot, as it constantly had a flurry of people swarming to watch their favorite streamers. Dreadnought would be lit up too, because it was one of the largest displays and the crowd seemed to take a liking to it.

But, there would be one outlier far back among the indie titles. Knight Squad, made by Chainsawesome Games, had a constant throng of people mulling about at all times. You wouldn’t expect it given the location, but it was a party back there. Once you had a crack at the game, you’d understand why — because Knight Squad is an incredibly fun multiplayer game.

Like any party game worth its salt, Knight Squad forces you into a good-natured competitive flurry for a few minutes at a time. And, when any given round is over, everyone will want to immediately start a new one. It’s easy to pick up and difficult to put down.

Boasting eight-player action, Knight Squad either pits everyone against one another separates them into four person teams. There are eight game modes — a few vaguely innovative, most classics everyone knows and loves. The likes of team and free-for-all capture the flag are present, and were maybe the biggest hits all weekend. For my money, working as a team to push a giant soccer ball while fighting off the other side was the most enjoyable.

Honestly though, it didn’t really matter which mode was played, as all players were fully into every round. Littering the battlefield are power-ups that constantly regenerate. Some are a bit more passive like boots to increase speed, or a sword to give a tiny bit more reach. Others were brazenly in-your-face like a kamikaze bomb and a lightning rod that shot streaks across the screen.

Whatever your method, Knight Squads brisk-paced action ensures you won’t remain dedicated to it for too long. Deaths come at a quick clip, and that power-up you really liked suddenly isn’t yours anymore. No worries, some other combination will manifest itself this time — oops, you’re dead again. Oh well, right back into the fray. 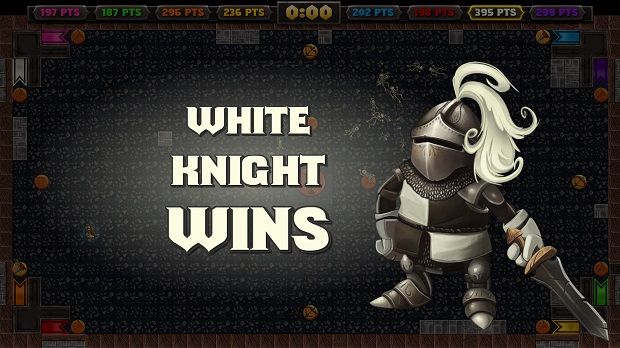 Despite being surrounded by seven other players, I flexed my Knight Squad prowess immediately. You see, I had a bit of an unfair advantage. I played it at PAX Prime during an impromptu play session at an indie showcase. When I got an email from the developers asking to book a PAX South appointment, I didn’t have to wonder what kind of coverage I’d get out of it. I just wanted to play again.

That’s why, of all the bookings at PAX South, Knight Squad was the only one I insisted Kyle accompany me on. For the life of him, he couldn’t understand why. Admittedly, it doesn’t look like much at first. Once we had one round under our belts, we didn’t want to leave. It’s the kind of game that just grabs you and never lets go until the party’s over. We stayed and kept playing, damn the ever-increasing mess of people behind us.

It’s unknown if that magic will transfer over to an online crowd. It’s unlikely that many will be able to accommodate eight players in their living room, so online is where most will see Knight Squad in full force. While the game’s Early Access right now, the first online version should go live sometime this week. The final retail build is scheduled to release sometime around late March on PC and Xbox One. For [email protected] parity clause reasons, Chainsawesome will start thinking about other platforms (likely PS4 and Wii U) at a later date.

Whenever it comes to your platform of choice, there’s a good time awaiting you. It’s a dose of Bomberman, a dash of Gauntlet, and a whole heaping of trash-talking your friends. That is, until you inevitably get shanked in retribution. Alas, that’s the circle of life in Knight Squad.