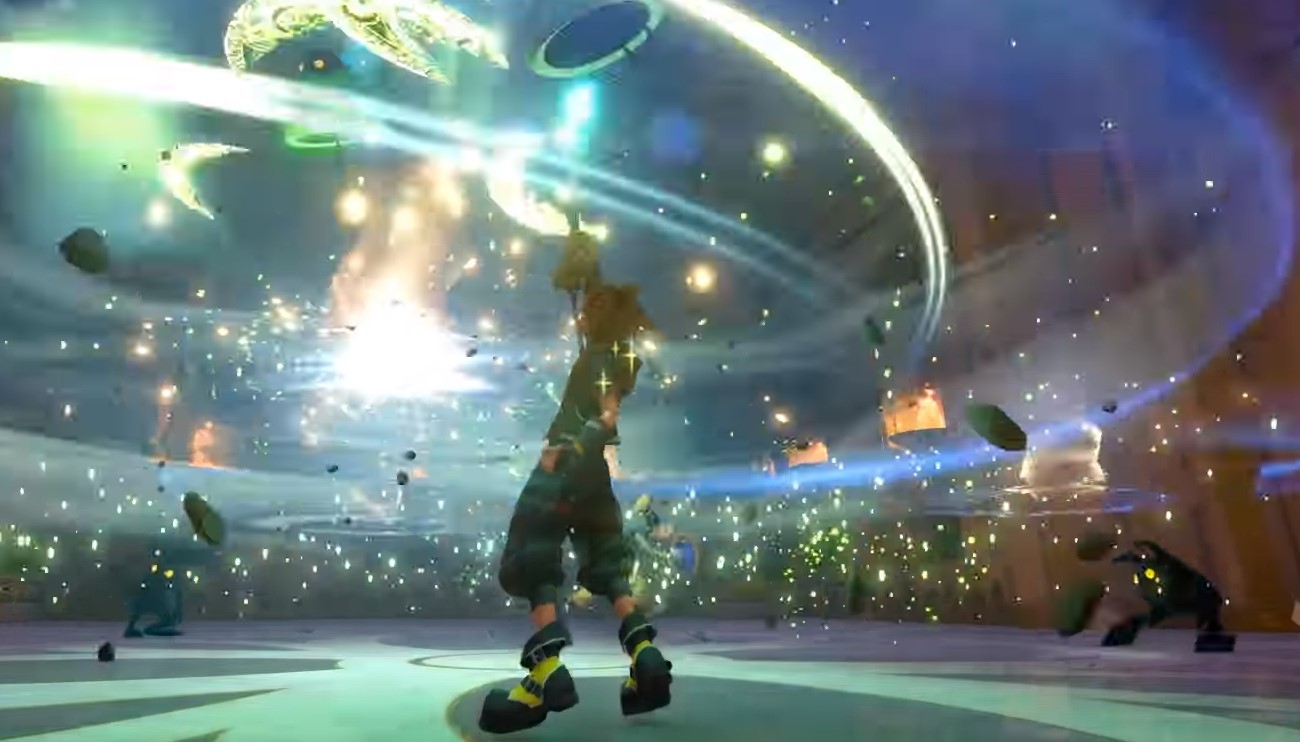 Like the action RPG junkie I am, I hyped myself up for Kingdom Hearts III on gameplay trailers full of spectacle-based eye candy. And despite everything happening on screen, I was fixated on three dots next to the combat shortcut menu. You see, if basic combo attacks are the bread of an action RPG, then spells and spell-adjacent abilities are the meat. Kingdom Hearts often adds enough extra ingredients to turn its combat into a club sandwich, but magic has always been an integral part of the series.

Unfortunately, in most of the series, using magic requires navigating through a command menu. And KH‘s usual command menu is very cumbersome, especially in fast-paced boss fights where you need quick access to abilities. Thankfully, also like many action RPGs, this franchise implements a shortcut menu that assigns any four spells to the four face buttons in conjunction with the shortcut button (L1 for this game). Thus, these shortcuts are more or less the “main” way to use magic. Yet this really just replaces KH’s unique problem with the same problem found in most action RPGs.

This shortcut design seriously handicaps the number of actual options players have by only allowing them to assign a small fraction of their available abilities. Kingdom Hearts emphasizes this issue even further than most action RPGs by making items share the same assigned slots as abilities. But at long last, KHIII has expanded its shortcut menu from 4 slots to 12 — as implied by those three dots I noticed — and I want to elaborate on about how I appreciate this tiny tweak not just for this franchise, but for the genre as a whole.

This lack of loadout space isn’t exactly a matter of game balance. Most action RPGs already balance ability use around several common mechanics like MP. In Kingdom Hearts specifically, Sora’s entire repertoire is still there in the menus, so the original designers clearly expected you to use all of it even if it’s out of the way.

Many people say having more options than you can pick is a great problem to have. But being limited that way is only preferable to having them all if having too many creates a new problem. Kingdom Hearts Birth By Sleep’s Command Deck is an excellent example of something that wouldn’t benefit from infinite command slots because command use is only limited by individual cooldowns. Its command slots are tied to its difficulty curve, hence players are explicitly given more as they progress. I would be peeved to not have those slots sooner, except it became almost immediately apparent having them from the start might have broken its own difficulty curve.

In Kingdom Hearts III, you instead have a traditional MP bar that drains with every spell. All spells depend on this bar, thus you cannot use a spell without limiting your ability to use other spells until you refill your MP. Increasing the shortcut slots in KHIII doesn’t make Sora’s magic more powerful, only more versatile and convenient.

For the most part, limited ability slots are actually a limitation of a controller’s scarce inputs. They’re often tied to directional inputs or a group of similarly located buttons, and coincidentally, most modern controllers group up similar buttons into sets of four. But several more recent real-time based RPGs — especially MMOs — have techniques to expand shortcut options on controllers and still make it feel convenient despite their limited buttons.

Kingdom Hearts III’s solution is to tab through multiple pages of shortcuts by tapping the up and down directional buttons while holding L1. My muscle memory with this series made this feel similarly clunky as the full command menu at first, but I quickly adjusted to it once I started to fill out my shortcut pages. Now, I’m constantly jumping back and forth between two pages of elemental attacks, with Cure magic on both and an extra page of emergency healing items. It feels so much better to have each magic type at the ready instead of cherry-picking which to carry and which to exclude.

Most action RPGs from the original Kingdom Hearts‘ time stuck to similar four-ability limitations — like Star Ocean, Tales, and so on — but four is extremely limiting compared to the dozens of options you can fill those slots with. This is especially true for KH. Since Sora can’t always rely on his partners to heal him, he’ll need Cure magic or recovery items constantly on the ready, possibly both in tougher boss fights. That slot is effectively chosen for you unless you have the guts to risk getting hit by a lightning-fast villain after his first combo attack. That left only three or two spots for choosing anything else.

That much limitation feels counterintuitive in a series where you can otherwise load out your characters with dozens of passive abilities and combo attack modifiers. Tripling this space gives all players much more freedom to customize their playstyle.

Admittedly, an expanded shortcut menu is far from the most integral addition to KHIII’s combat. It’s not as flashy or prominent to gameplay as Grand Magic, form changes, or any other mechanics tied to the triangle button. This addition is really just stapling a few more pages to an existing mechanic. Yet alleviating such a big limitation that has been in the series for years makes Kingdom Hearts III feel like that much more of a step up from its predecessors, and it helps everyone use those much shinier additions to their fullest too.

It’s such a simple tweak that almost any action RPG could learn from following a similar example. A simple and small tweak, but one that has a large impact on how players can approach gameplay.