A good first-person shooter on the Vita?

The PlayStation Vita is a great system with a slowly increasing library of great titles. The exception being in the first-person shooter genre, that is.

You’d think that after one of these big game companies made a handheld with two joysticks that there would be a bigger incentive to create more first-person experiences. Instead, we’ve gotten only a few first-person shooters to date: Resistance: Burning Skies was a joke, and Call of Duty: Black Ops: Declassified was an insult.

I recently went hands-on with Killzone: Mercenary for the Vita, and based on what I saw, it could finally be the FPS the Vita has been so badly needing. It’s hard to say this early on if it’s a must-own, but my early impressions are at least far more favorable compared to the previous two disasters.

Right off the bat, I just have to say Mercenary looks gorgeous. There’s a ton of detail in the levels, and everything looks great running on the handheld. The controls are pretty exceptional as well, offering a nice mix of touch and button inputs. The touch controls are fairly minimal, such as swiping the main screen in certain ways to perform a melee, touching enemies to launch missiles at them, or selecting weapons like your grenade. Double tapping the rear touchpad also lets you sprint, but you can simply press one of the front buttons to pull off the same thing.

Single-player has you assuming the role of a mercenary who’s working both sides of the conflict between the ISA and Helghast. While that initially sounds cool, it’s not like you’re given the option of choice. There’s a set story in place, and you’ll be merely hopping between the two sides at certain points as you progress.

The demo Guerrilla showed off dropped me halfway into the story, where you’ve gotten caught up between the two conflicting sides and have to escort some kid who’s important to both the opposing forces. It was an escort mission, but it didn’t appear like you had to protect the kid at all as the enemies were pretty focused on me. That’s a good thing, as the kid was on my ass the whole time and not really trying to hide behind cover, which was pretty silly given all the bullets flying around. Plus, the AI didn’t seem that bright either.

On the multiplayer side, Mercenary will allow up to eight players to fight it out over Wi-Fi in deathmatch, team deathmatch, and Warzone matches. Multiplayer also features a new Valor Card system where you can collect cards from another player’s corpse. These cards are tied into the ranking and money system of the game, so you’ll definitely want to be collecting them to stay ahead of other players. Single-player and multiplayer share a joint bank account too, and any money earned will go towards your being able to purchase new weaponry in multiplayer. 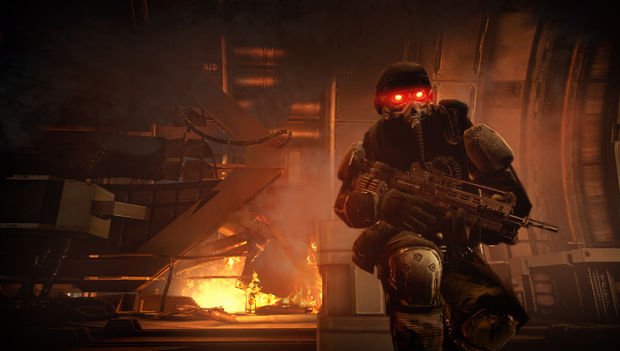 It all looks pretty promising, but the sour taste left in my mouth from other shooters leaves me hesitant. I’m sure others feel the same way, so I asked Laura Dilloway, environment artist on Mercenary, what they’re doing to reassure fans.

“We worked with Guerrilla Amsterdam and their games are exceptionally high standard, so they wouldn’t let us put anything out there that was sub-par,” Laura told me. “So if you love the Killzone games previously then I think you’ll love this one.

“We’ve always set out to make the definitive first-person shooter on a handheld, that’s always been our aim. We’re not going to let anything go out unless we’re 100% happy with it. Hopefully we have produced something people will enjoy.”

Laura also told me that the campaign will last around seven to nine hours spread over nine different levels. On top of that, there are three difficulty levels and of course all the multiplayer offerings. It’s definitely a meaty package, and with this one being developed by a studio that has some experience with the franchise for a change, I have way more faith that Mercenary can deliver.