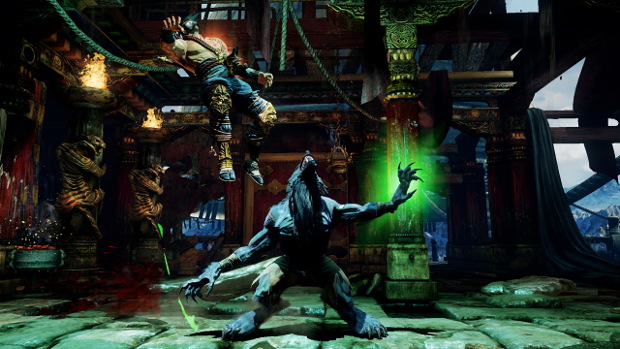 Dojo, survival mode, and the many uses of Killer Points detailed

With the Xbox One coming in just two weeks, it’s about time Microsoft let out a bit more information about one of its more talked-about titles. Killer Instinct is easily one of the most commonly-seen titles for the new console, and it manages to look better and better the more I see of it.

In a recent article from OXM UK, Microsoft Studios game designer Daniel Fornace details what players can expect when they fire up the game. Killer Instinct looks to stay relevant for the long term, and the developers plan to steadily release content when it’s ready. Because of this, Arcade mode will be out when the full eight-character roster for Season 1 is available. Which will come sometime next year.

“Our Arcade mode is going to come out when we’ve done the eight characters,” Fornace said. “So it’s not going to be at launch, at launch we’re going to have six — Orchid’s the last — and then we’ll have two more following up post-launch.”

Currently, the roster is at six characters, B.Orchid being the most recent reveal for launch play. Though this may seem like a small concession for next-gen title, the developers at Double Helix hope that the available modes will keep players busy. For instance, an extensive practice mode called Dojo will be available for players looking to learn the ins and outs of the combat in Killer Instinct.

“We start out, we go through the basics, stuff you’ll see in other fighting games like navigation, blocking, crouching, jumping, throws, specials, and then we go into Killer Instinct specific things, like combos; Ultras, which are the finishers, and Instinct Mode.”

Interestingly enough, the Dojo mode will also display hit boxes, frame data, and other information such as damage output for the hardcore fighters. These features are rare, and it’s a clear indication of the respect they have for the community by providing them.

As we’ve seen, KI will feature not only an extensive online mode, but also a robust Survival mode where players can take their characters through an infinite series of battles. The survival mode will also take advantage of Killer Points, in-game currency, to help you skip the harder matches or jump ahead a few matches.

“The way it works is you pick a difficulty and you go in, and you’re basically playing a long chain, and after each match you regenerate health, but as you go on you generate less and less, and even if you do beginner difficulty, as you get to the higher numbers the CPU does start getting tougher, so you’ll still hit a limit. You set your difficulty to where you’re at — so if you set it to Champion it’ll start hard and get even worse.”

It’s goes without saying that Killer Instinct seems like a pretty unorthodox release for a fighting game, let alone for a launch title. But it’s pretty clear they’re passionate and excited about what they’ve got in store for players.