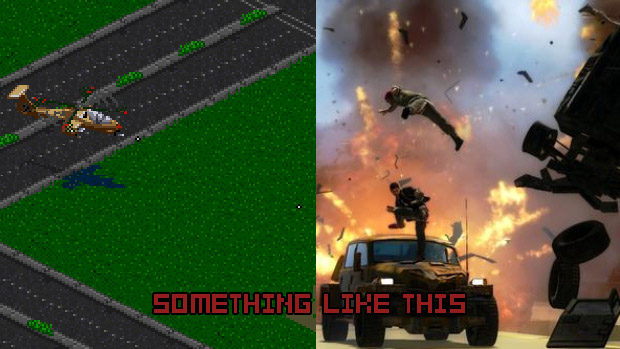 Avalanche Studios, the studio behind the Just Cause series, is working on a SEGA-published downloadable vehicular top-down twin-stick shooter using the Just Cause 2 engine. In the immortal words of Senior Producer Andreas “Snygg” Thorsén: “The IP is all about driving or flying around blowing stuff up while playing with your friends and that to us, is a dream-project.” Did you expect anything else?

The game will have local two player co-op and up to four-player online co-op, and you will shoot a lot of stuff. In vehicles. Thorsén spoke to Eurogamer about the project, mentioning how they were looking at Shadow Complex and wanted to do something similar — old-school mechanics using modern graphics.

Another interesting bit from the Eurogamer story is that “Renegade Ops takes its cues in this regard from Konami’s 1983 cult classic Jackal, and 1993 hits Cannon Fodder and Jungle Strike.” HNNNGGG!

Renegade Ops will hit sometime in 2011 on PC, XBLA and PSN. No details have been released about a price, or whether Bolo Santosi is a playable character. Make it happen, Avalanche.