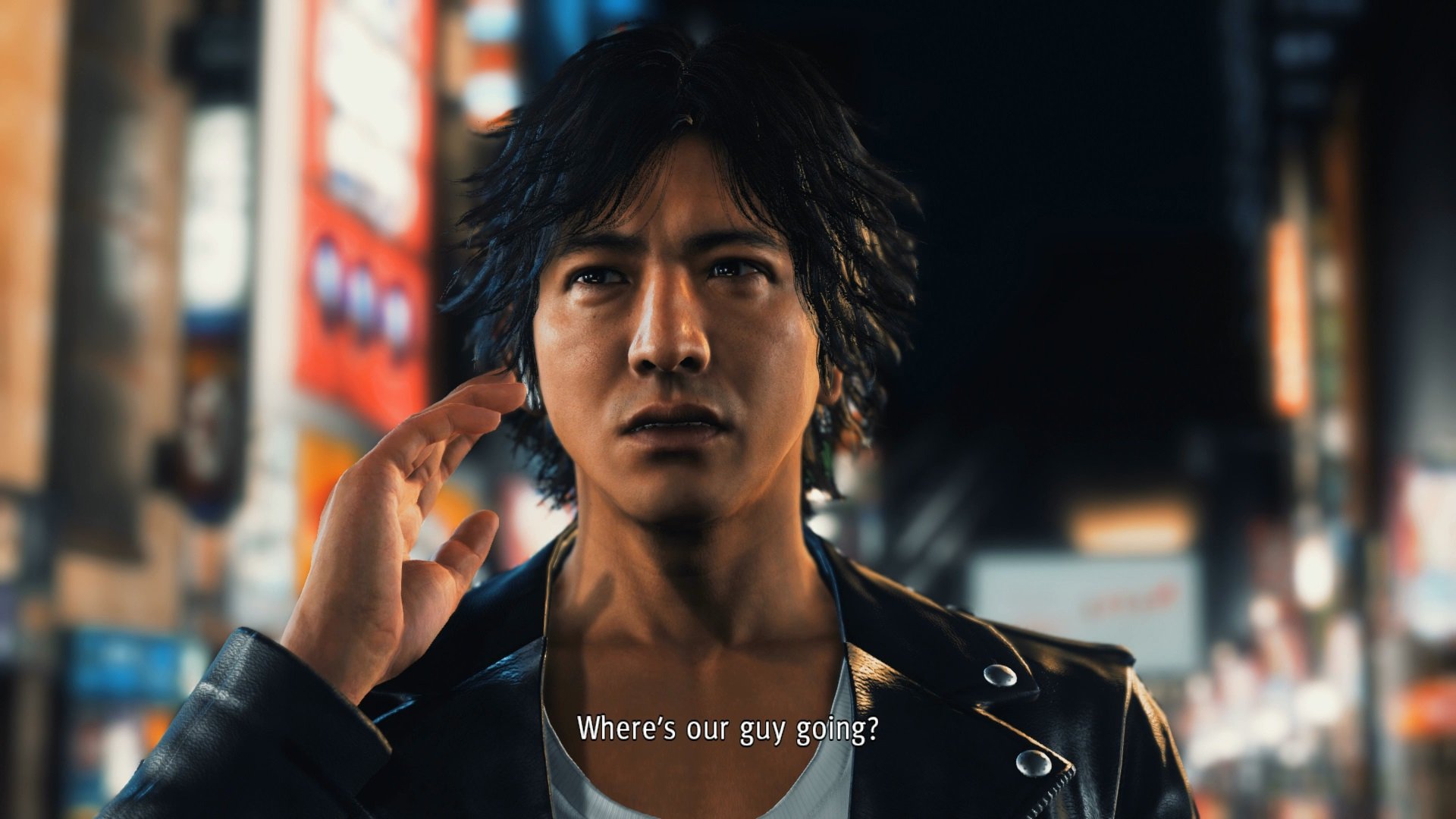 As most of you readers know, I’m a big fan of the Yakuza series. Ever since my first taste with Yakuza 3, I’ve been hooked and have eagerly anticipated whatever game Ryu Ga Gotoku Studios teased. Even if a few of the games have disappointed, the experiences are filled with wacky characters, crazy martial arts action, and an undeniable sense of style.

When Judgment was announced as Judge Eyes in Japan with a Western localization being worked on, I was ecstatic. The other Yakuza loyalists and I didn’t have to worry about potentially waiting three to five years for a single game in the series to come out. Now we were getting confirmations alongside the Japanese announcements, which was splendid news.

With that knowledge, I knew I could safely ignore any info about the game since it wouldn’t be too long before I got my hands on it. As much as I wanted to play this stylized take on a detective story and dig into the differences between Yakuza protagonist Kiryu Kazuma and Judgment star Yagami Takayuki, waiting mere months from the Japanese release was hardly difficult. I did my time leading up to the release of Yakuza 5, so this would be a cakewalk.

Imagine my surprise when Sega reached out to me to sample a pre-release demo. Even though I didn’t want to spoil too much about Judgment before launch, I enthusiastically agreed to head up to New York City because this was an opportunity I didn’t want to pass up.

It was a trip worth taking. I had a blast playing Judgment’s opening hours.

Like the majority of Yakuza games, Judgment has a slow start. You aren’t thrust immediately into action but instead, are sat down to watch a series of cutscenes that lay the groundwork for our protagonist’s plight. The game opens with a burning building and some guy menacingly laughing before switching over to star Yagami Takayuki.

Yagami is the top defense attorney at his law firm and has just gotten a man, named Okubo Shinpei, off from a murder charge. His boss, Genda Ryuzo, is explaining to one of Yagami’s co-workers that the man is a marvel in the courtroom. He has never lost a case despite murder charges ending in a conviction 99.9% of the time. When people pick Yagami, they can rest easy knowing they’ll be acquitted.

Not as soon as Genda finishes his speech does the firm get a call from the police. Turns out Okubo couldn’t keep his hands clean because he was found at the scene of a crime bloodied and cackling. After becoming a free man, Okubo went directly home to his girlfriend, stabbed her to death, and then set the building on fire. I guess he had a lot of pent-up energy from his victory in court.

Yagami is completely distraught, having realized he failed the family of the victim. Flash forward a few years and Yagami is now working as a private investigator. He has long given up working as a lawyer since he can’t reconcile his guilt over the Okubo case. It’s a hell of an opener and sets the stage for your new style of play and obvious redemption arc.

From there, the game gives you control and ferries you through a couple of tutorials. If you’re familiar with any of the Yakuza titles, all of this should come as no surprise. You get into a fist fight, learn about combos and leveling up, and even get to explore a small section of fictional city Kamurocho before being given the reins. In between dictated battles comes some exposition from characters that show off the new systems unique to Judgment.

You’ll take on cases, tail suspects, and even snap photos of people from cover. It could be seen as sluggish, but I didn’t find the AI to be all that bright. When tailing, you’re given a fairly generous margin of error even on the Hard difficulty. It’s certainly possible to get caught, but the checkpoints are pretty generous and you can run away before anyone gets too suspicious.

Your first tail leads into an inevitable fight (as per Yakuza tradition) and this is where all of the improvements to the Dragon Engine start to become evident. While battles were technically seamless in Yakuza 6 and Kiwami 2, there was still a slight delay from when enemies engaged you to when you were able to attack them. Judgment has smoothed the process out to the point where you probably won’t notice the load times.

Along with that, Yagami has access to multiple fighting styles. This isn’t entirely new to the Yakuza series (it was present in 0 and Kiwami), but it’s a marked improvement from the past few entries. It opens up opportunities where Yagami can focus on single opponents or go for crowd-smashing attacks. It’s also just plain fun to tinker with new moves after a while.

Once you kick around your tail a bit, he decides to make a run for it. Yagami gives chase and the parkour system introduced in Yakuza 6 finally gets utilized. You’ll run down alleyways, jump over fences, and shove pedestrians out of the way all without clumsy loading screens. It’s such an awesome element that lends an action-movie vibe and keeps you constantly engaged. These are the kinds of things I wished the Dragon Engine would push for and I’m happy we’re finally seeing them come to fruition.

After another battle and cutscene (this guy just won’t go down), the city is yours to explore without restraint. Seeing as how I didn’t want to spoil any other plot details, I figured I would take a look at the new mini-games Judgment had. One of the joys of the Yakuza series is how richly detailed the cities are. Games, side-quests, and a plethora of accurate storefronts all coalesce into this completely believable depiction of Japanese city life. Judgment doesn’t disappoint.

A few mainstays are missing (bowling and karaoke are MIA), but both Club Sega locations have been given an overhaul with new titles. Classics do return (Out Run and Super Hang-On are present and accounted for) and they’re joined by an original rail-gun shooter based on Yakuza: Dead Souls and House of the Dead. I didn’t realize how much I wanted something like that in my life, but I’m happy it exists.

In between your various missions, you can return to Yagami’s apartment and a small level of customization is available. For once, the items you win from Club Sega’s claw machines serve a function. It doesn’t grant you bonus XP or anything, but you can play interior decorator with Yagami’s pad and it’s really funny to take selfies of him pouting in front of stuffed chickens. You can collect various records and play them on Yagami’s stereo, which is a nice in-game way to listen to the awesome soundtrack.

Out on the streets, all of the familiar Yakuza trappings are present. You can stop by Don Quijote and buy a bunch of recovery items for battle. Sub-stories will become available as you progress through the story and you can engage with random events via a Twitter-like application on Yagami’s phone. In fact, the entire UI and map screen are fashioned after his cellphone, lending a more high-tech vibe to the entire ordeal.

The biggest change for Judgment from Yakuza is that Sega is investing in a dub for new players. While Fist of the North Star: Lost Paradise (another title from Ryu Ga Gotoku Studios) had the option, this is the first game set in Kamurocho to feature one since the original Yakuza on PS2. While I’m likely never going to use the option, I started off the demo with English enabled and I was reasonably impressed. This doesn’’ come off as a quick cash grab to broaden customer appeal.

If you’ve kept up with video game voice actors, names like Matthew Mercer (Resident Evil) and Yuri Lowenthal (Prince of Persia: The Sands of Time, Spider-Man) will be familiar to you. They are joined by the likes of Greg Chun (Overwatch, NieR: Automata), James Hong (Kung Fu Panda, Big Trouble in Little China), Cherami Leigh (RWBY, Persona 5), Fred Tatasciore (Mortal Kombat X, Gears of War), and many more. It’s an accomplished cast bringing a measure of quality that even a stickler like me can appreciate.

It also helps that two sets of English subtitles will be available. One set follows the English dub beat for beat (complete with proper timing for elongated pauses in speech) while the other is a more faithful translation of the Japanese script. The game automatically switches between the two when changing languages, which requires a quick reboot of the game when making a choice. It’s a level of polish and finesse that I’ve come to expect from the localization team at Atlus.

About the only concern I have for Judgment is that the various detective activities might become a chore. I could see tailing suspects dragging down certain chapters, and the limitations put on using your drone seem arbitrary. I would like to have full control of the device instead of being guided to the answer, for instance. I didn’t get to experience this, but I was told courtroom segments would be present in the final version, so that might liven things up quite a bit.

The most curious aspect I saw was an advertisement for DLC in the menu. When you pull up Yagami’s phone, a banner is plastered right at the bottom with a quick blurb on new content. While previous Yakuza titles have received DLC in Japan, they usually release in the West with all of their content present. I haven’t heard anything else on the matter and Sega wasn’t able to address any questions I had (all information was under embargo).

I’m pretty certain it’s going to be a bunch of bonus items and throwaway extras, but you never know. Yakuza titles always feel like complete experiences before you even get into the side activities, so I’m probably worrying over nothing. I just hope that Sega doesn’t excise fan favorite mini-games and expect gamers to pay for them.

Even with those concerns, Judgment is shaping up very nicely. This is easily the best use of the Dragon Engine yet and it’s magnificent to see Kamurocho in a different light. I’m definitely sad that Kiryu isn’t around anymore, but the man has left a legacy behind that very few series will ever reach. It’s time for a new star to rise and I’m eager to see how Yagami stacks up. Bring on the Judgment!