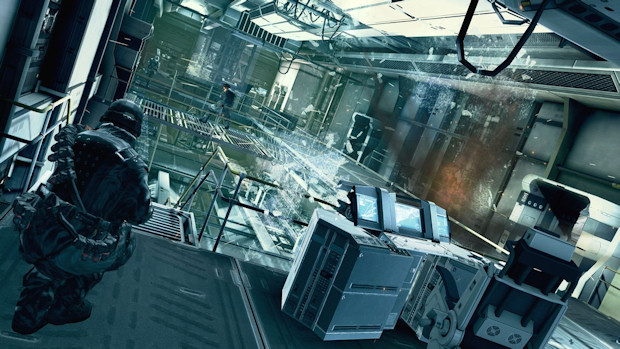 As you may have guessed from our 9.5 review, the news stories, the features and even my many Twitter ramblings, I am an avid, obsessive player of Killzone 2‘s online mode. The heavy feel, the awesome character classes and Sean Pertwee’s rasping commands make the game an incredibly addictive experience, and as such, I have played the game almost daily since it first released in February.

The game’s first DLC, the “Steel & Titanium” Map Pack, was released yesterday and has brought two brand new maps to the table, along with twelve Trophies to sweeten the deal. How do the new battlefields, Wasteland Bullet and Vekta Cruiser, hold up? Do they make a worthy addition to the Helghan battlefields, or do they disappoint like so much DLC of ages passed?

Luckily, we’re on the case to tell you exactly what to think. Hit the jump for initial impressions of the new content!

The first of the maps, Wasteland Bullet, is comprised of two speeding trains that rattle along a dangerous tunnel. The map’s design is to be praised for the concept, with the blurred tunnel background providing a fresh and interesting multiplayer backdrop, helped by the canvas and flags that constantly blow with air pressure. Unfortunately, my initial time spent with Wasteland Bullet has been absolutely horrendous. Both the indoor and outdoor sections of the trains are thin and cramped, basically amounting to a pair of incredibly long corridors. Not only does this lead to lengthy treks in order to reach any objectives, it can also be a complete mess in terms of knowing what the Hell is going on.

Before Wasteland Bullet, it was rare for me to ever Team Kill. However, it seems that every grenade I threw in this map seemed to catch one of my allies. I haven’t played such a low scoring game since I first started playing Killzone 2 months ago.  The sheer volume of friendly fire was incredibly irritating, and it was simply an atrocious experience. It was not an isolated problem, either. I was still managing to stay in the top five players of my team with only 20 Points. At this point in KZ2‘s lifespan, where the types of games I play run to 100+ Points per player, that’s a significant downturn.

As if the constant docking of points from friendly fire wasn’t frustrating enough, the map is also full of death traps that add little to the gameplay but certainly take away a lot. In order to move between trains, players need to jump from one carriage to another. If you’ve played Killzone 2 and experienced its heavy and clunky jump control, you may begin to get an idea of how annoying it is to try and make that transition from one carriage to another. It’s also worth pointing out that pillars sometimes stand between trains at intervals, and rush past in a bid to knock players onto the tracks mid-jump. The roof of the train is also home to instant-death pillars as well, that can behead unlucky gamers with one hit.

These traps are more aggravating than fun, and as of the time of writing, I am simply yet to have any fun playing Wasteland Bullet. So far, this map has easily surpassed Corinth Crossing as my least favorite. Just not very enjoyable at all, which is a real tragedy since the concept is quite brilliant and it’s a visually striking environment.

Fortunately, Vekta Cruiser is a far superior option. Straight away the map deserves points simply for being such eye candy. Rather than the brown and murky maps that make up most of Killzone 2‘s repertoire, the bright, clinical, colorful Vekta Cruiser stands out the stark whites of the walls and the purple glow of the energy core things. Whatever they are.

The map takes place on several floors, and the relatively small size of the map means you’re never too far away from the action. Ironically, for a map marketed on the strength of its claustrophobic tendencies, I’ve not had any friendly fire incidents so far. Capture & Hold and Search & Destroy make for some incredibly chaotic firefights, but it’s the good kind of chaos, not the cramped and grenade-filled chaos of Wasteland Bullet.

Due to the small nature of the map and lack of hiding places, you can’t expect to survive too long on this map. However, I’m sure as one gets used to the layout, breathing spaces will be found and Vekta Cruiser will be home to higher scoring games. The map is definitely recommended, however, if you’re not looking to gain XP and just want to get into a really brutal, chaotic brawl. I think for longer games, it’s a bit too small and death-heavy, but quicker battles are perfect for this particular environment.

Steel & Titanium brings twelve new trophies Killzone 2, although to be honest they’re just a bribe to get you to buy the pack. In order to unlock them, all you have to do is just play the different classes and use their skills on the new maps. Reviving five people per match will give you a trophy on each map, for example, as will having five allies spawn from one of your Spawn Grenades. Very easy trophies, but since trophies lack the appeal of Achievements, this bribe will likely only affect diehard PS3 fans.

Taken as a whole package, I can’t help but feel like Steel & Titanium could have done more as the first DLC pack of the PS3’s biggest exclusive game. While both maps look terrific, only one of them was really very enjoyable, while the other so far as been infuriating.  I imagine that, over time, I’ll grow to accept Wasteland Bullet, but it’s definitely left me with a bad taste in my mouth right now. Vekta Cruiser is a definite keeper, but as for whether or not $5.99 is worth obtaining it, I’ll leave that up to you.