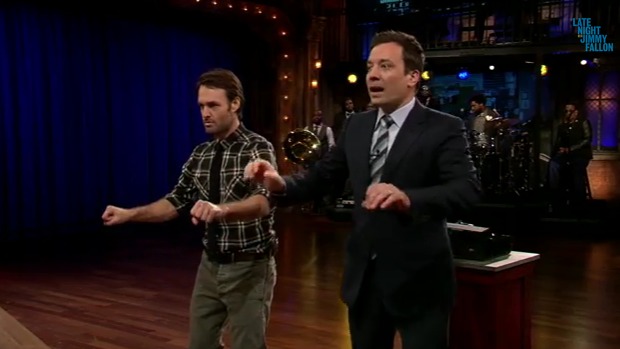 Last week on Late Night we saw Jimmy Fallon and Ice-T kick some robots around with the PlayStation 4 for its launch. Naturally, the Xbox One couldn’t go without being demonstrated for its launch week, so Blain Howard visited the set to show off Forza Motorsport 5 and to let Fallon and guest Will Forte play a piece of Kinect Sports Rivals.

I’ll be honest: I’m a fan of Jimmy Fallon. I’m glad that he and his team make an effort to cover videogames under the umbrella of entertainment, and that he does it with enthusiasm (as opposed to disdain). The excitement he puts out is infectious; for a split second while watching the clip above, the Wave Race-esque chunk of Kinect Sports Rivals actually seemed like fun.