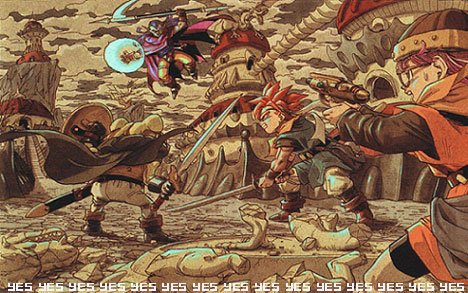 Let’s clear the air on last night’s Chrono Trigger rumortoid: it’s coming to the DS, and it’s coming our way this holiday season.

The lovely folks at Square Enix sent out a press release today confirming Weekly Famitsu‘s report of the Chrono Trigger DS remake. The game will feature a new dungeon (yes!), a “wireless play mode”, dual-screen presentation, and touch-screen functionality. I’m going to go out on a limb and say that the use of the two screens will probably be pretty perfunctory, à la Final Fantasy III DS. We’ll probably be able to use the stylus to move around and navigate menus, and the second screen will house extra menus and information. That new dungeon sounds intriguing, though.

No firm release date has been set, but it will drop sometime this holiday season, which could mean anywhere from October to Christmas. Similarly, mum’s the word about the alleged graphical “enhancements.” The announcement says that character artist Akira Toriyama will be on hand to “lend his signature art style to create [a] vibrant world,” but there are no specifics. I suppose it could be redone in 3D, but I really hope that Square Enix holds on to the beautiful sprites that were so effective the first time around.

People like to be harsh on Square Enix for whoring out its popular franchises, but I doubt anyone will complain about this. Quite frankly, these remakes don’t bother me that much — the more people that get to play Chrono Trigger, the better.

[Update: According to GameSpot, Chrono Trigger won’t get the 3D treatment that Final Fantasy III and IV did. Thanks, GohanGVO!]