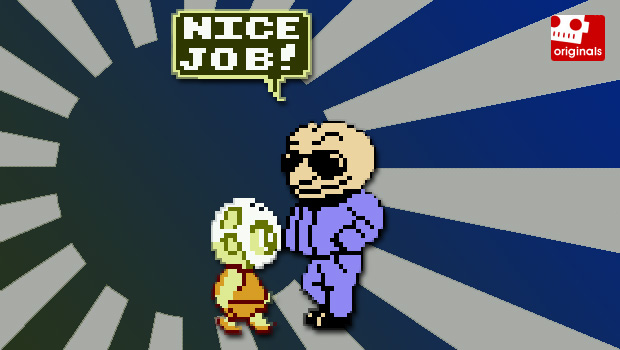 It’s 1988 and Namco has just released one of the most violent, critically acclaimed horror-themed games to ever hit an arcade. Splatterhouse was unlike anything else at the time. It was a game made by horror fans, for horror fans.

Each of the game’s hellish stages contained weapons, enemies, and memorable boss fights that stood out from across the arcade hall. Smashing zombies with a 4-by-4, seeing monsters split in half from a shotgun blast, and witnessing one of the great plot twists of its era is what made Splatterhouse such a classic.

And then Namco put out Wanpaku Graffiti: a cute but average platformer for the Nintendo Famicom. WTF, Namco. What the literal f*ck?

Splatterhouse is a gruesome, difficult action-platformer where you punch giant monsters in the eyeball until they explode. Wanpaku Graffiti is a game where you fart on a geisha dancer to which she responds, “Welcome to Japan!”

Whereas Splatterhouse subtly cribbed from horror classics, Wanpaku Graffiti gleefully parodies everything from Michael Jackson’s “Thriller” to David Cronenberg’s The Fly. The difference between Wanpaku (“Naughty”) and other series entries includes aesthetics, controls, level design, system hardware, and everything in-between. As a result, series fans may detest it while others who never liked Splatterhouse may find this oddball entry charming.

Wanpaku opens with a cinematic in which series antihero Rick rises from the dead after lightning strikes — a rather direct ode to Friday the 13th. Alongside him is his mourning girlfriend Jennifer and Rick’s new nemesis the Pumpkin King. There’s nothing scarier than a guy with a giant pumpkin head. Assuming you don’t get hardcore spooked at the start, you’ll soon run into a vampire doing the Thriller dance at the end of stage one. It’s a frightening sight for sure.

It’s hard to talk about Wanpaku without making it sound awesome. This is why I always assumed the game must be a pretty fun parody, like Konami’s excellent Boku Dracula Kun and Parodius. Well, it’s not. But, it’s not awful, either. Wanpaku is just a very average platformer peppered with some inspired moments that will make both Splatterhouse and horror film fans grin.

The controls feel just alright. Chibi Rick is a lot lighter and faster than his adult form, so the game focuses on platforming more than any other Splatterhouse. You also don’t have the ability to punch or kick. Instead, you nonchalantly swipe demon spawn with a meat cleaver, occasionally replacing it with the series’ iconic shotgun (which still feels great!). Seeing the little guy lug around a weapon as big as his head is simultaneously adorable and disturbing. That kind of sums up Wanpaku.

Wanpaku brings some ideas of its own to the series but none of them feel fully realized, such as a leveling mechanic that increases your health bar as you defeat enemies. There are also collectible orbs that will give you an alternate ending. Otherwise, the game is a pretty straightforward and repetitive action-platformer that locks you in a room to fight books and knives one too many times. Splatterhouse managed to make a name for itself in arcades, but Wanpaku easily blends in with numerous other mediocre Nintendo platformers.

Wanpaku isn’t a good-sounding game, but it looks pretty nice for a late ‘80s Nintendo release. There is a novelty in seeing signature series enemies on the system’s limited color palette. It makes me wonder if there could have even been an effectively scary Splatterhouse for the system. Probably not. Instead, we have this rather wacky one with baffling Engrish, inexplicable movie references, and bosses that are more adorable than terrifying.

I’m hard pressed to think of another game that has a Tower of Druaga character and a pixelated Jeff Goldblum in it, but it’s the twist ending that really puts Wanpaku’s schizophrenic plot over the top. After defeating the Pumpkin King, it’s revealed to the player that Rick and Jennifer are on a film set and none of the game’s enemies were real. MIND=BLOWN, right? The alternate ending is a bit more grim, leaving the player at the start of the original Splatterhouse, establishing Wanpaku as a bizarre prequel.

Wanpaku is worth playing for the curious horror or Splatterhouse fan. It’s short, one of the easiest games on the Nintendo, and full of quirky moments worth seeing for yourself. I can’t for the life of me understand why Namco went the route it did, but Wanpaku remains one of the oddest left turns for a game series to ever happen. Wanpaku is a time capsule not only for Namco and its beloved horror series, but ‘80s horror cinema as well.

Also, you get to fight giant turds in a bathroom. Once again, WTF, Namco?

Why do you think Namco made this strange offshoot?

What game parodies do you enjoy?