Along with churros and KFC, dungeon crawlers are one of those random Western creations that Japan seems to like a lot more than Americans. Although the more traditional, stat-heavy brand of dungeon crawler (Wizardy, Etrian Odyssey) has had the most influence overseas, From Software (Dark Souls) carried the genre torch by bringing it into 3D with the atmospheric King’s Field series.

In between King’s Field entries, the Japanese developer put out an overlooked dungeon crawler by the name of Shadow Tower in 1998. It would come to the States a year later with little fanfare, which is too bad because it paved the way for its superior Japan-exclusive sequel. 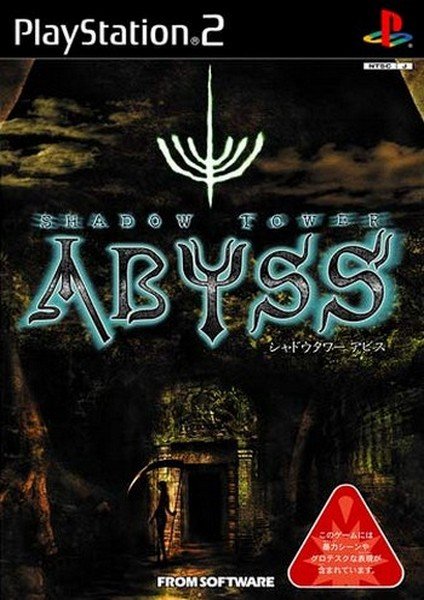 Fan translation: No, and this guide is a must.
For fans of: Dark Souls, King’s Field, Arx Fatalis

Shadow Tower Abyss was the last of its kind — a Gothic dungeon crawler in which the player travels deeper and deeper into the darkness by every hour. Survival is based as much on skill in combat as it is on being resourceful and daring in exploration.

The original Shadow Tower felt like a spin-off of the King’s Field series but with a psychological horror twist (think Silent Hill‘s surreal, dark world). The enemies were stranger, the plot was more obtuse, and the game placed an emphasis on exploration. Very cautious exploration — remember, these are the guys who made Demon’s Souls and Dark Souls. In fact, Shadow Tower is the bridge between King’s Field and Demon’s Souls in that it shares many elements of both.

Make no mistake, though, Shadow Tower Abyss is very much its own thing. Unlike Demon’s Souls, the game takes place in one sprawling dungeon that becomes weirder the deeper you venture. I miss this aspect in modern games, including Demon’s Souls. There is something unique about slowly traversing the layers of a mysterious dungeon, coming across traps, and discovering story details through random, discarded notes (not that I can read any of them in this particular case).

As much as I loved Demon’s Souls, its divided levels didn’t capture the sense of danger and mystery you expect to find in a From Software dungeon crawler. Level hubs and checkpoints take away from the atmosphere and danger that a game like Abyss embodies. 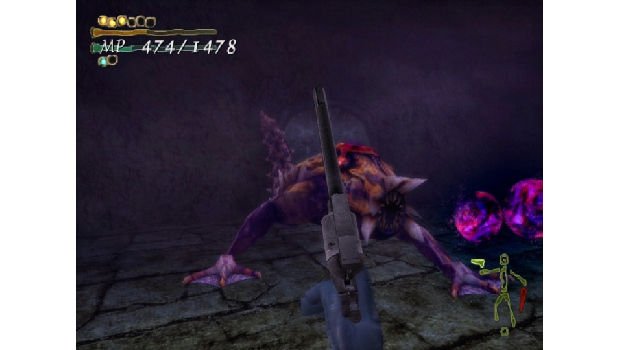 Unlike the PlayStation debut, Abyss has a decent amount of variety within its world. Through the swamp pits filled with poisonous clouds, a scenic cliff side, and the abstract neon glow of later areas, From Software provides an incentive to explore this dark, haunted world by virtue of its design and pacing.

Whenever you start to grow tired of an area, you soon find yourself facing off against a boss or discovering a key to the exit. The action at the core of the game is repetitive, but that’s to be expected of the genre. Whether you take to it or not will depend on how you feel about a good, old-fashioned dungeon crawl.

Despite the similarities shared with the King’s Field series, From Software decided to give these games a different name for a reason. They are pretty peculiar, mechanically speaking. For starters, the unorthodox controls may be hard to adjust to for some players. Looking up and down is restricted to the back shoulder buttons, and strafing is left to the front shoulder buttons. This is because the right stick is used for attacking. Moving the stick side to side registers as a slash attack, up as an overhead slash, back as a back slash, and inward (R3) as a forward thrust. Different weapons are optimized for different attacks, which also deal more damage to certain enemies.

The biggest difference between Abyss and other games lies in its leveling system — rather, the lack of one. Not really. Your strength increases through exploring and collecting defeated enemies’ souls (sound familiar?), but all your other stats are completely dependent on items and weapons. You’ll occasionally come across an item, usually hidden away, that will let you upgrade dexterity, endurance, and all the other standard stats. For the most part, you’ll be depending on weapons to give you better stats. This wouldn’t be so nerve-wracking if the items weren’t always on the cusp of breaking. 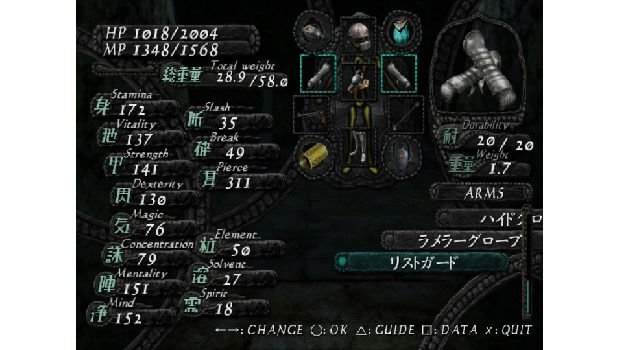 Like Demon’s Souls, the game feels like a survival horror title during its opening hour. You creep around in the dark with very little resources, terrified of any enemy encounter. Since the enemy A.I. is pretty dumb and easy to take advantage of, you’ll soon find yourself breezing through areas. Nevertheless, combat remains fun due to the variety of weapons, which range from medieval pikes to assault rifles. You can only equip two weapons at time, so choosing the right combo will go a long way toward your survival.

If you are a fan of dark, moody dungeon crawlers, Abyss is a unique game that shouldn’t be missed. What it lacks in detail and polish, it makes up in atmosphere and art direction. I’d love to see another Shadow Tower sequel, but sadly, I don’t think we’ll ever get one. The modern crop of gamers like to have their games divided up for them and conveniently sprinkled with checkpoints. The design philosophy behind Shadow Tower, or any good traditional dungeon crawler, goes against what makes modern games popular and accessible.

It’s too bad that Abyss was never brought to the West, despite being mostly localized. You can’t blame publishers for not wanting to take a chance when similar From Software titles failed to find a market over here. Demon’s Souls is a genius game for keeping many aspects of a dark, Gothic dungeon crawler intact while appealing to a wide audience. However, returning to Abyss shows that something was lost in that transition. There is something unique about being lost in the darkness of Abyss, searching for an ammo clip, that can’t be replicated in modern titles.

Sometimes you want to explore a game’s world, and sometimes you just want to get lost and let the gloomy atmosphere consume you. In other words, dungeon crawlers are the post-punk of videogames, and I love my post-punks, dammit!

What is your favorite dungeon crawler?

Do you miss the days when it was possible it get lost in a large world?

Would the addition of guns ruin the Demon’s Souls series?