Japanese games often possess a delirious quality that leaves some people scratching their heads and others delighting in the madness. Rhythm Tengoku, filled with characters and personality that are uniquely Japanese, is one such game.

Yet, all the quirky characters and scenarios feel like they occupy a coherent world, one where the offbeat antics of the WarioWare series successfully merge with the rhythm genre to form a portable classic that never made it to the States. Although many have heard about it and may have played its sequels, it remains an obscure gem. 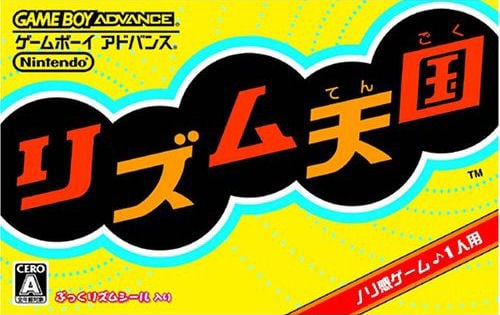 Given the wide claims of OCD-ridden children and the growing popularity of rhythm games during the early ’00s, it wouldn’t surprise me if Rhythm Tengoku was made in response.

Like Gitaroo Man and Elite Beat Agents, Nintendo’s charming rhythm game collection is memorable for its music as much as it is for its strange sense of humor. Even when the game gets difficult — grunting starts to mask the sounds of your tapping feet, head nodding turns into aggressive headbutting —  it’s hard to get angry at the charming world of Rhythm Tengoku. However, it’s very easy to be upset with Nintendo for keeping it from those outside Japan.

After implementing innovative vocal technology in Wario Land 4‘s soundtrack and redefining mini-game collections with the WarioWare series, Rhythm Tengoku was the next logical step for Nintendo. It was an ambitious project with a bubblegum pop producer and one of Nintendo’s most innovative development teams. Well, maybe not completely logical, but thank God it happened!

Unfortunately, Nintendo decided to forgo a Western release due to the arrival of the Nintendo DS. Like Mother 3, Rhythm Tengoku is one of the greatest games for the GBA, one that I and the rest of the Internet soon discovered through emulation and imported copies.

Like WarioWare, Rhythm Tengoku is a series of mini-games with controls that don’t get more complicated than pressing a button or two in time to the music. Unlike WarioWare, the visuals are some of the most striking of the GBA’s catalog, and the mini-games are more varied and developed — as they should be, since you’ll be spending minutes (not seconds) with each one.

The game contains eight “stages,” each containing five levels/songs and a sixth remix level that sets a combination of all the previous level actions to a new tune. Given the format of the game, which varies from song to song (and level to level), I thought that it’d be best to give my thoughts on my top five favorite levels. Make no mistake, I could easily list ten. Even if those ten included entries from Tengoku‘s two sequels, the majority of the list would still be dedicated to the original.

Night Walk is one of the few levels in the game that doesn’t open with a tutorial because of the simple fact that you don’t need one. It’s as reductive as the game gets — press the A button in time with the beat. Your reward? You get to watch your 8-bit avatar skip from box to box, as stars twinkle and scroll behind him.

Although my love for this level has waned since the first time I played it, it remains a memorable one due to the music and tension it draws out in the player. Given the relentless rhythm of the song and the seemingly endless sprawl of the stage, Night Walk’s challenge has more to do with fatigue than timing. I often find myself becoming self-aware of what I’m doing and suddenly freaking out, wondering if I’ll be able to persevere to the end.

It’s also the only stage to have distinctly retro graphics that refrain from pushing the power of the GBA yet still manage to charm and create a unique atmosphere as well as any other level in the game. The recently released Japanese sequel Minna no Rhythm Tengoku even has a direct tribute to Night Walk at the end of the game!

Here is another “hit the A button in time with the music” level that I love. Maybe I’m just simple in my tastes, but the reason this one sticks out has more to do with presentation. It’s rudimentary in concept, but Air Batter is one of the few levels in the game that messes with your perception. It’s also the first and best stage that does so.

Like Night Walk, the player is tasked with pressing the button in time to the beat, although this one is more consistent in its melody and rhythm. Your avatar is a baseball player trapped in a green room floating in space. Your visual cues are baseballs that are launched from a pot and return to the infinite when struck.

The mind game is in the stage’s inexplicably zooming in and out, to the point where the ball is no longer visible. Succeeding based on the visual cues is no longer an option, leading to inevitable failure on your first attempt (most of the time). To add to the stage’s manic quality, your character’s head becomes a giant tomato or a bunny after each extreme close-up.

In addition to having wacky character-based games, Ryhthm Tengoku is filled with wonderful abstract gems like Hopping Road. Here, you bounce small balls from one platform to the next, one controlled by the D-pad and the other by the A button.

The balls bounce along to a shifting tempo that makes the timing hard to predict until they are right in front of your controlled platforms — I develop an uneasy sensation every time they get near. Soon enough, the level throws multiple balls at you, each with their own rhythm which quickly ramps up the challenge.

For a game that is so much about the audio-visual response, Hopping Road is surprisingly fun despite its simplicity.

There are many categories the mini-games of Rhythm Tengoku can be filed under. For example, Bon Odori is a “clapping” game, where you clap to a song as your three partners jump up with glee or give you dismissive glances (depending on your performance).

As I mentioned above, the music is what sets Rhythm Heaven apart, and Bon Odori is a shining example of this. It’s one of the few songs with full vocals, which are compressed though not enough to sound grating. The track itself is a traditional Japanese song, but it’s so giddy and warm that it always puts me in the right mood.

I’m a fan of tossing stuff, be it salad, balls, or salad balls(?). If you knew this, you may have suspected that Toss Boys would be my favorite mini-game on tap in Rhythm Tengoku. After all, what could be more fun than tossing some balls with adorable children?

By the time you reach the fifth tier of levels, you begin to feel like you’ve seen all the game has to offer. This isn’t far from the truth, given that the levels remaining after the fifth tier are remixed, harder versions of previous ones. Toss Boys, however, is one of the most original and jovial entries in the game, tapping directly into my love of 16-bit volleyball games.

With three characters mapped to the buttons and D-pad, Toss Boys has you keeping the ball in play as you toss to the beat. The beat will frequently speed up and throw your characters into full-on volley panic mode, keeping you on your toes. It’s a simple idea that’s well executed with just the right amount of feedback and presentation to make a mini-game that is memorable beyond its soundtrack.

Rhythm Tengoku‘s legacy has carried on, with a DS sequel reaching Western gamers in 2009 and another one for Wii on the way. However, the original remains the best for many reasons. The music and stages of the series’ debut are unmatched in quality, whereas I struggle to find a memorable tune or a stage that didn’t make me want to pull my hair out the DS game — jury’s still out on the Wii game. Even in their best moments, they can’t capture the magic and surprise of the GBA debut — to be fair, I haven’t played all of the recent Wii sequel.

It’s unfortunate that many will never be able to play this lost gem due to Nintendo’s lack of faith in consumers. There was also an arcade port by Sega, but that didn’t reach the States either.

Do you want to dropkick me for saying the sequels are inferior?

Do you enjoy tossing balls as much as I do?