Shooting killer clowns with cream pies. Exploring a haunted mansion to a smooth jazz soundtrack. An ape going apesh*t on a COW TRAIN. My dreams may not come true in reality, but at least Harmful Park makes them somewhat tangible!

For this introductory episode of It Came from Japan! — and all following entries, for that matter — we will pretend that money and region locks are not an issue. This will leave the door wide open for me to gush about this PlayStation classic and for you to play it, however you can. 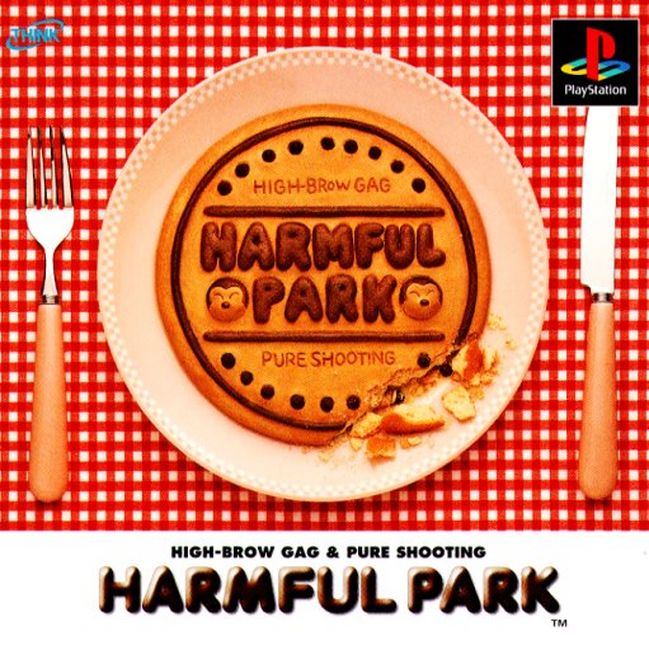 As a shoot-em-up fan, I often want to introduce others to the genre but constantly run into the same problem: the best introduction to the genre has never existed in America and goes for insane amounts of money online.

In a genre filled with sci-fi cliches, dull mecha ship designs,and intimidating difficulty levels, Harmful Park stands out for all the right reasons. It’s a game guaranteed to put a smile on anyone’s face, including those who have long avoided the genre due to steep difficulty curves and stale aesthetics.

All aboard the Cow Train

At its core, Harmful Park is an elementary, horizontal side-scrolling shooter with easy-to-grasp scoring and weapon systems. Yet, every detail beyond the core mechanics is filled with such imagination that is rarely found elsewhere in the genre. Its closest companions are Air Zonk and the Parodius series, but that has more to do with the game’s humorous presentation than anything else.

After glancing at the stellar pixel art and playing the game for a couple minutes, you may conclude that this is the product of a developer seasoned in the genre. I was surprised to discover that not only is Harmful Park the first (and last) shoot-em-up from Sky Think Systems, it also is the developer’s third (and last) game. Before Harmful Park, the developer made two puzzle games that are even more obscure: Kururin Pa! and its sequel Shingata Kururin Pa! (both for PlayStation/Sega Saturn). 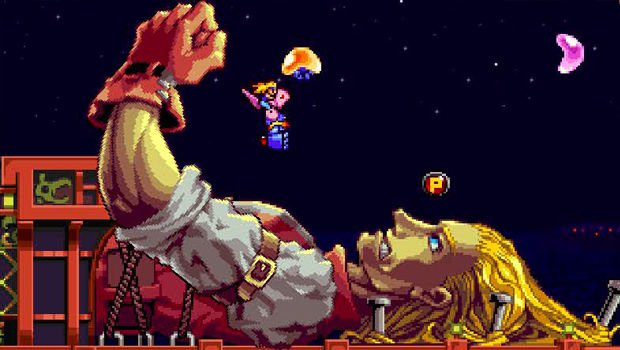 Little is known of what became of Sky Think Systems, although there are some theories that it became a business software developers due to a another company in Japan sharing a similar name. However, there is no direct link I can find between the two beyond that. If this is the case, it’s pretty sad because Harmful Park hints at a developer with a great amount of passion, imagination, and psychedelics readily at hand.

Although the game features lengthy intro and outro cutscenes, I couldn’t grasp much of what is contained in the dialog. From what I gather, the story is about an amusement park (Heartful Park) that becomes a battleground after a mad inventor (Dr. Tequila) turns the machines against its owners and visitors.

In an effort to reclaim the park, another inventor sends her two daughters to the rescue. Apparently, she is too old and lazy to battle against inflatable dinosaurs and giant wiener dogs with helicopter blades. You (and a second player) play as the two girls, piloting ships that have hands which propel gun fire and heat-seeking jellybeans. 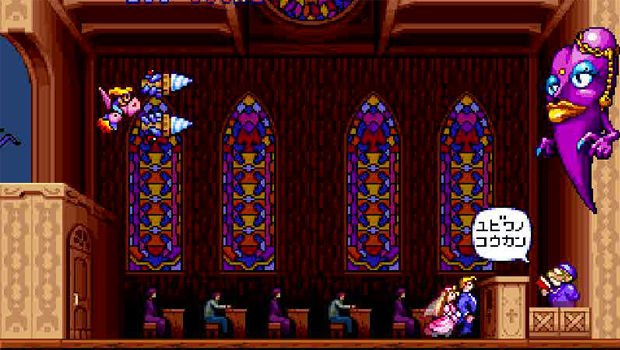 A potato and some deadly sweets

A major part of what makes Harmful Park so much fun is its simplistic weapon system that is easy to learn but takes time to implement skillfully. You will always have four weapons in your arsenal, each which have an optimum tactical use. These weapons are linked to the four shoulder buttons on the PlayStation controller, making it easy to switch from one to another.

In each stage, you come across power-ups that raise the equipped weapon up to three levels, drastically improving the weapon’s range and damage. In addition to this, each weapon has its own special attack, which you also earn through item pick-ups.

Harmful Park is one of the few shmups that offers enough difficulty options to serve as both an excellent introduction to the genre and a worthy challenge-of-the-week game for hi-score seekers.

The game’s default difficulty is Easy, and it lives up to its name: enemy fire is scarce, bullet patterns are simple, life extends are generous, and bosses are quickly dispatched. However, on higher difficulties, the game becomes a formidable experience that few will be able to finish with no continues.

If you like to play for score, Harmful Park has a simple but addictive combo and gem collect system. You also get a Perfect bonus if you don’t miss any enemies in a stage, though it’s much harder than you might think.

Finally, there is a Score Attack mode, featuring an exclusive level that only the most hardened shooter fans will be able to clear. It throws all of the games trickiest enemies at you in a claustrophobic stage designed to trap you against walls. 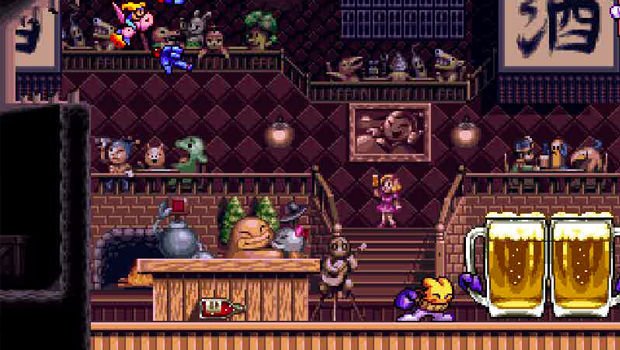 I love the explosions in Metal Slug and the character designs of Neo Geo games, but it’s Harmful Park that contains some of my favorite pixel art of all time. As a player who always thrives for that 1cc (credit continue) playthrough, I often become fatigued by the lifeless backgrounds of other shooters. This is not the case with Harmful Park.

Every moment of its six stages is brimming with background activity, original enemies that don’t appear elsewhere in the game, and numerous memorable oddities. Pandas riding pandas, gumball-dispensing spaceships, flying kamikaze squirrels, and so much more are prime material for forum avatars.

Harmful Park is overbearingly twee, but I can’t imagine that its delightful, colorful world and cast won’t put a smile on anyone’s face.

Bosses that know how to pump-it-up

You can’t have a shmup without some epic boss fights. I wouldn’t say that the ones in Harmful Park will push your skills to the limit, but their personality and design make them unforgettable.

It’d be a shame to spoil them all, but rest assured that you will see some of the weirdest bosses of all time. There’s that inflatable dinosaur above, being pumped up by two blobs, or the mopey, giant teenage girl who you fight at a drive-in theater (projecting a film displaying a teenage girl’s nosebleed). Like every other aspect of the game, the boss fights are full of little details. For example, the teenage girl boss fight in Stage 4 has an ugly face unless you play on Hard. You just haven’t earned it yet, baby!

Even the mini-bosses are awesome, such as a giant Frankenstein’s monster giving you the middle finger or a man who sobs tears of death after witnessing his crush getting married to another man. There is always something supremely wacky and unexpected to look forward to in Harmful Park.

This strange phrase is pasted on the game’s menus and front cover, but I’m still not entirely sure what it means. Harmful Park has funny gags but none that I’d label “high-brow.” It has shooting as well, but I don’t think there’s anything that makes it any more “pure” than other shooters. Nevertheless, the nonsensical phrase has its own charm to it.

That, and the pancake on the cover looks freakin’ delicious!

Before I conclude this retro review, I need to emphasize just how original the game’s stages and adversaries are, not just in visual design but also in functionality. After playing through the game again a couple of nights ago, I noticed some things I missed before. I imagine the same will happen the next time I play as well. Harmful Park is just one of those games. 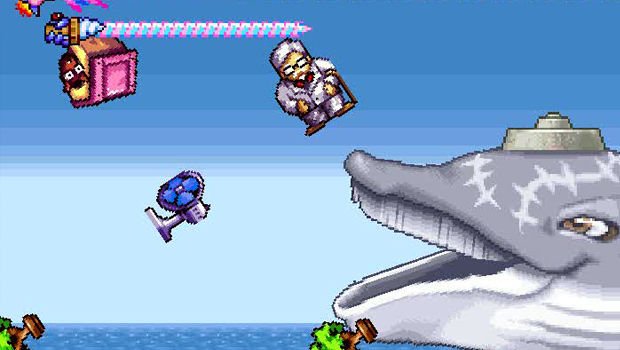 For example, before Stage 2’s mini-boss, you must travel down a long corridor with ghosts that can’t be defeated by firepower. The only way to get rid of them is to fly through a pair of floating ghost teeth, triggering it to chomp down on whatever is caught in the middle. There are tons of other neat moments like this that make the game memorable in a way other shooters aren’t. I love Cave and Takumi, but moments in those games just don’t stick with you like the ones in Harmful Park.

Harmful Park’s slower pace and unorthodox level design may keep it from reaching classic status with shoot-em-up fans who have mastered Cave and Eighting titles, but it still has yet to be topped as being the perfect introduction to the genre. I can’t think of many other games that embody such fantastic ideas dealt with a whimsical charm and stuff them into a nearly flawless shooter. What it really comes down to is that Harmful Park is the best game to ever feature a whale that throws up Colonel Sanders clones at you.

Are you a filthy-rich Dtoid user who sleeps on a bed of $200+ Harmful Park CDs?

Do you have a game that you’d like to recommend for a future entry?

Have you played this game? How much do you love it? This much, perhaps?

[This beat is non-stop!]